Crohn’s is caused by all your stress, right?
What do you eat that makes you so sick?
Are you resting/eating right/doing yoga/overhauling your life? Because if you were you wouldn’t be sick.

When you are first diagnosed with a chronic illness – or with any illness, really – you deal with a lot of questions about what caused it. Most of the questioners are well meaning and are looking for something to say. But some are more aggressive.

I had an acupuncturist once who got angry with me when I said I couldn’t identify anything that caused me to develop a chronic illness in my thirties. Like most people, he really wanted there to be something I had done wrong, because then my disease would be my fault. And if disease is my fault, then they are safe from it.

The harder he pushed me, grilling me to name the sin I had committed that brought inexplicable illness into my life, the more frustrated I became. I finally gave him the answer that I save for the pushiest inquiries. What caused my illness? “Shit luck”.

This is the truth about IBD. It strikes at random, and though some with family history might be able to predict their illness, it’s still not anyone’s fault. And the rest of the truth is as varied as the people who manage the collection of diseases that fall under the heading of Inflammatory Bowel Disease. 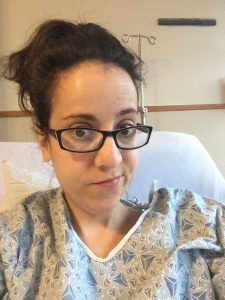 My truth was that ultimately I would need surgery – that which I feared the most – to get into remission. I have been blessed with complete remission since, but I live with the truth that my disease will never be cured, and that it can reappear at any time.

My truth included a community that supported me through the shock of diagnosis, through the darkest days of pain to hospitalization, surgery and recovery. My truth was that I needed to learn to count on people, to relax, to let someone else take over for a while.

My truth was that life went on. I was diagnosed 9 months after meeting my now husband, and we married 10 days after my ostomy reversal. He started a new job on the day of my first surgery. We bought a condo, moving in during my first days of recovery, when an as-yet-undiagnosed wound infection nearly knocked me out. I wrote and worked and sang and travelled. The hardest years were not lost.

Everything does NOT happen for a reason; that would mean that there is a really rotten God ruling the universe.

There’s a community of support waiting out there, and the internet makes it easier to find than ever.

That’s my truth. What’s yours?

I’m sharing this post for World IBD Day, observed every year on May 19.