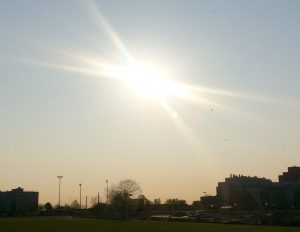 This morning the International Union of Superiors General had an audience with Pope Francis, and by all accounts (or at least the account I read on Twitter), they were really giving it to him, pushing for more leadership opportunities, asking preaching by women, and asking why there are no female deacons seeing as Scripture mentions female deacons in the early Church.

Of course, the UISG did not invent that last question. Many of us have been asking it for years, with the unspoken answer being “it would freak people out to see a woman in vestments”.

But Francis did speak a response, saying something we rarely heard from recent popes: Let’s talk about it.

In what appeared to be an off-the-cuff remark, he announced that they would set up a Vatican commission to study femalee deacons in the early Church, and possibilities for women in the diaconate today.

Off-the-cuff can also be interpreted as moved by the Spirit, and I don’t think anyone is surprised that Francis is always moving in the direction of dialogue. Some previous papacies declared certain topics off limits to conversation, but he doesn’t shy away from those topics, sometimes flummoxing his advisors and fellow Catholics.

The internet is going to explode today with think pieces about female deacons, and I will struggle to get anything else done as this consumes my day. But I will try to remember that precious moment when the news came up on my phone. I was walking in the morning sun, out earlier than usual, cherishing the morning and the new life that spring has brought. When I saw that the question was being opened I was shaken in the best possible way, reminded of a million things I had forgotten that I wanted because it was easier to forget. I knew the backlash would come quickly, but I cried tears of joy anyway, marveling in the morning, grateful for new life.

One last thing – can we all please agree not to use the term “deaconess” at all? Ugh.

How did you react to the news from the Vatican this morning?