The fourth Tuesday in January was not my first blizzard.

A wicked nor’eastah was blowing in to Boston, and we all knew what to do, but were still giving in to the childlike excitement of being snowed in and required to stay home. The school was buzzing at the end of the day prior as people scrambled to gather what they needed for a day or more snowbound, and to get home before the flakes started to fall.

I too was eager to get home, knowing that I needed to secure a parking spot for the next few weeks since I wouldn’t be able to drive the next day, or the days after. But I had an appointment after school I had to keep.

My fiancé called just after noon. He had started a new job that day, finally working in Boston after four years of us living and working in cities hundreds of miles apart. Because of the storm they needed to send him to Worcester to work a shift beginning at midnight that night, disrupting his plans to do a few days of orientation before starting his reporter’s duties in earnest.

He needed to get on the road, but we needed to see each other that afternoon. I suggested he meet me at work at the end of the school day.

After classes ended I hustled to the main lobby and saw him standing there in his brand new blue snow jacket with his station’s logo splashed across it. We quickly walked to the chapel for my after school appointment. 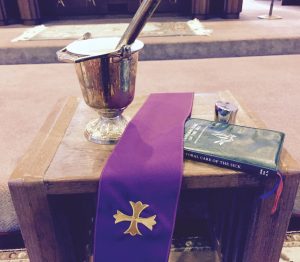 The peace of the Lord be with you always.

And with your spirit, our two voices softly replied.

We never sat down, standing with a priest as he led us through the rite of Anointing of the Sick. I hadn’t expected Robert to be there with me. We stood so close to each other we were nearly touching.

I was prayed over. I was anointed. We hugged and thanked my friend for presiding.

This was to be the last time we would see each other before I went in for surgery. I wasn’t nervous about getting there, I had other family coming up. I trusted my surgeon. He was excited to get on the air and start his new job.

We stood in the edge of a seldom-used doorway near the chapel to say goodbye. I hadn’t realized how badly I wanted him with me for the sacrament until I had heard his voice praying with mine. I was so grateful to him for being there, and almost grateful for the snow changing his schedule, though this was not how we’d planned to say goodbye.

I rested my cheek against his immaculate new jacket and he kissed my newly-anointed forehead. As students and faculty rushed around to prepare for the coming storm I felt the calm that only comes when you are exactly where you are supposed to be.

We’d been praying for a new job for him for years, and praying that I would get well in the same desperate breaths. On the fourth Tuesday of January what we hoped for and what we feared finally came to pass. On that gray, hectic day before we held each other with a placid disbelief.

How could we be expected to comprehend everything that was happening to us? Perhaps that’s why I have cried every day this week, six weeks later, remembering that goodbye.

God willing we will have many years to process what we have been through during these difficult but joyful years. Maybe even we will have a little time when things are easy. If they are not, may I still at least have him beside me in prayer while we seek and find God’s grace.

in this time of sickness

you have come to bless your daughter with your grace.

Restore her to health and strength,

Make her joyful in spirit,

and ready to embrace your will.

Grant this through Christ our Lord.