A year ago I was beautiful.

One sunny afternoon on our second summer in Assisi, Robert and I decided to explore the bosco, a forest walk next to the Basilica into a valley where Francis is purported to have walked.

Robert carried a backpack with a wedge of cheese for snacking and I carried the pain that had taken up residence in my gut during my long and complicated Crohn’s flare. I was so used to it that I hardly noticed it as we descended the shady paths through the bosco.

We reached a clearing with a chapel and a shop, and we spread on the grass with our cheese and bread. I nibbled, not having had much of an appetite that summer, My dress, size small, was loose on my wasting frame. The cheese tasted good.

I had worn sensible sandals knowing that our ascent could be arduous. Despite not having been able to run since the spring I still fancied myself an athlete and wasn’t worried about the climb. About 1/3 of the way up I stopped to throw up. We sat on a bench and I breathed through spasms of pain as a cold sweat broke out across my face. The rest of the walk was a lightheaded rotation of walking, vomiting and resting while my dear, patient love encouraged me and rubbed my back. 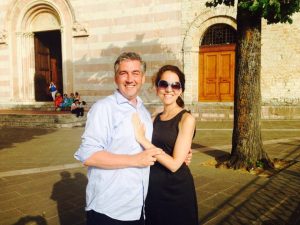 Later we rested, and I felt well enough again. A few days later he took me out on the Piazza Santa Chiara, he threw confetti in the air and got down on one knee, and we agreed to be bound together in sickness and health. A crowd of Italian tourists congratulated us and one offered to take our picture. We were smiling like crazy and the diamonds on my fingers glittered. My bony shoulders shone in the afternoon sun and each angle of my face could cut glass.

I ate that night, after the priest travelling with the music festival offered a special blessing and a number of our friends gave toasts. I didn’t think about how I would feel after, and I filled up. I don’t remember the outcome specifically, but it’s safe to assume I threw up later.

When we returned from the states we joined my parents for a celebratory dinner. We all met in the restaurant, and I spent the hour prior with the seat back in my SUV in the parking lot, laying back with NPR on the radio and trying not to think about the fatigue and pain. I ate two ravioli at dinner.

We told the story of our engagement and our plans for the wedding. It was only my father who had the good sense to lean over at dinner and say to me “you look like hell in that picture.”

When people complimented me on my weightloss I was always careful to point out that it was due to not feeling well, and they would often tell me it was a silver lining, at least I looked good if I didn’t feel good, some even dared to say they envied me. Those must have been the ones who weren’t listening.

The crisis finally reached a breaking point and they cut out the diseased part of my guts, and voila, I could eat again. My body began its crawl back to the soft and round equilibrium that appears to be its preferred state.

And then the terror came: what will all those people who cheered my weight loss think? Will they judge me for being lazy or gluttonous or simply ‘bad’ in the way we judge women who dare to carry flesh upon them? The praise I had never sought for wasting away lingered in my mind.

I lay awake at night, channeling my post-operative stress into obsessive thoughts about my hideous, disgusting body. It felt like those adolescent days of self-hatred, when my insecurity directed itself at the most obvious target: the flesh. All the hard work I did in my adulthood to be comfortable in my skin was wiped away.

The few pieces of clothing I allowed myself to buy during my emaciation don’t fit. The dress I wore in the bosco overflows.

Working out ferociously both assuages my weight-guilt and helps me sleep at night. I considered not eating again, but I don’t have it in me. Dread and insecurity can’t quite overpower the marvelous gratitude I feel for being alive, in remission, and no longer frightening my family.

I am grateful for the hundreds of types of crunch, from the crisp salt of a Cape Cod potato chip to the fresh mouthfuls of lettuce and sunflower seeds to the creamy collapse of peanuts between my teeth. 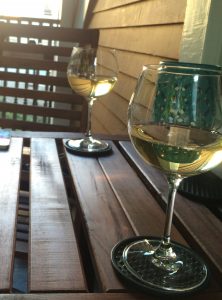 I am grateful for cold glasses of white wine on the porch with my husband in the evening, for sharing a pizza and having more than a few bites, for not having to scrutinize salsa for bits of corn.

I am grateful for not being anemic anymore, for not passing out when I am singing, for the energy to hike and bike and paddle and run.

I am grateful, though I can’t believe I’m writing it, for this flesh, for all of it that dances and sings and serves and yes, even eats. I labor to let that gratitude outweigh my confusion and shame over how I look, and my fear that the illness will return soon. I want to just be grateful. I am privileged beyond measure to be well for a time, to return to the joy of eating, the joy of the flesh that I had almost forgotten.
Like what you read, or want to stay in touch? Subscribe, or catch me on Facebook or Twitter.