I have a secret I have been keeping for weeks now.

After only a few weeks I backed out on my usual Lenten commitment of not drinking throughout the season. We were out at an event and someone put a glass of wine down in front of me and I realized that this particular sacrifice wasn’t serving me well spiritually. I picked up the glass and began to sip.

When the time came to schedule my surgery, it was as if a switch had been flipped. For years my attitude was to avoid surgery at all costs, and after my January hospitalization I had made peace with the necessity and couldn’t have the bowel resection done fast enough.

My surgeon was astonished at how much better I looked at our pre-operative appointment than I had looked when she had met me in the ER. “Mind over matter,” I suggested. Then I thought about it again and revised my statement. “Makeup over matter.”

I took out my little notebook and was ready to fire off the questions I had prepared. Before I did, she talked me through my CT scan results and explained my surgery.

“Because of the pressure put on your distal bowel due to the narrowing, the intestine is distended to about 7 cm.” I silently converted to inches and grimaced. “In order to give the resection time to heal we are going to have to give you a temporary stoma for about three months.”

My grimace deepened and tears sprang to my eyes as I turned my head away. “My wedding is in three months.” My voice cracked and I was ashamed.

At some point during the surgery someone put an ostomy bag on me, though I hadn’t eaten for a few days and wouldn’t have any output for another few. After a few days I needed the ostomy nurse to show me how to change the bag. The floor nurse had shown me without fanfare how to empty and clean it the day before.

As instructed I pulled the bag off, crammed with the nurse into the tiny hospital bathroom. I looked in the mirror, frowned, and sniffled. “Why are you crying?” the nurse demanded with a hint of aggression that surprised me.

“I just, well…” I inhaled slowly through my nose and gestured at my reflection in the mirror. “Well, there it is.”

As soon as I started having thicker output I could be discharged, and I couldn’t get out the door fast enough. That same nurse commended me as I waited for my ride. “Some people stay two weeks after the surgery because they refuse to look at it.”

I hadn’t realized that was an option.

Because of the nature of a temporary (or “loop”) stoma and the nature of my healing and anatomy, I started having a lot of trouble getting a good seal right around the time I ended my medical leave. I didn’t want to leave the house just as it was time to get back to all of the things I had been missing.

I have a number of stories of filthy bathrooms I needed in an emergency, of lies I told (no one spills coffee on their waist), of having something foul occur at the least opportune time, of throwing away tights in public restrooms and meeting important people while worried what might show up on my shoes.

I don’t want to tell you any of those stories. We both have too much class and discretion for that. 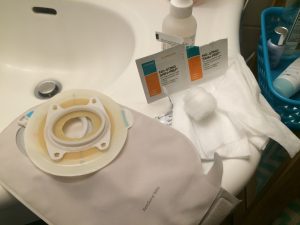 Here’s a story I can tell you. One morning a week ago I counted the number of bags I had left to be sure I had enough to get me through the reversal, even if I had to change them frequently due to poor seals. I had just enough to make me feel confident.

As I trimmed them with the neat scissors that suppliers send, desparate for your business, to be used to customize the bag to an individual’s stoma, I accidentally cut into the bag, ruining one. Cursing, I sipped my coffee and pulled out another. I cut through that one as well.

I screamed and put my head down on the teak shelves we bought for storage in our new bathroom. He asked what was wrong.

“I never should have left the hospital because I am disgusting and can’t take care of myself!” I cried before wiping my eyes, picking up the scissors again, and trimming a new bag.

Doctors and nurses, hearing how hard a time I was having would often say “at least it is temporary”. I never expressed such a view, because it made me feel guilty to think of people who manage an ostomy permanently. Behind the guilt was a little fear, because I have learned that my health is fickle, and there is no guarantee that I won’t go through this again, that it won’t be forever.

We carry so much around with us, and we call it burden or sacrifice, in this case opposites that mean the same thing. One suggests extra hardship, one suggests loss, and they both have hovered over me these weeks.

I believe we impose discipline on ourselves when things are easy so that we will be able to accept sacrifice when it is no longer of our choosing. People used to tell me “I don’t know how you give up drinking for Lent. I would never be able to do that” and I couldn’t quite understand it. How could you not be able to? You simply decide and begin.

This year my heart was heavy with too many sacrifices, and I couldn’t accept one more. I enjoyed a glass of wine with my loved one, and it gave me some pleasure for a time.

There are no comforting clichés. Sometimes God does give us more than we can handle. Nothing happens for a reason. What doesn’t kill you makes you very, very weary.

None of the trite sayings are true. I’m not even sure my shame, anxiety and guilt are true. Getting out of bed every morning, that is true.

By the time you read this I will have gone back into the hospital, to my now familiar doctors and nurses and staff, to have my stoma reversed. The doctor agreed to do it a little earlier than usual so that I’d be recovered for the wedding. This season of my life is over, and I wonder how long it will take me to shake the dread and gloom that visited me during this new adventure.

I have been told that they won’t sew up the incision. I have been told I’ll be sent home with gauze and instructions to pack the wound as the edges of my skin complete their intuitive journey back toward each other.

I have been told it heals better that way.