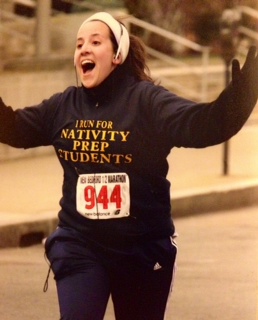 Around mile 10 of the New Bedford Half Marathon the course takes you beyond the hurricane barrier, and the wind suddenly assaults you, reminding you that you are running along the coast. If you are near the back of the pack, as I usually am, the spectators have gone in at that point, and you are left by yourself in the wind, exhausted from the first ten miles, not quite close enough to the finish to feel optimistic.

That’s what I remember from my first half-marathon in the winter of 2006. I walked most of those last three miles, undertrained and in crummy sneakers, with a Walkman cassette player shoved in my pocket (yes, a Walkman in 2006). When I turned the corner toward the finish line the few remaining spectators on that dreary, cold day inspired me and I ran, smiling, through the finish.

That was the start: a truly miserable race that somehow made me want to do more. I continued running almost against my will. After that I started running the Hartford Half Marathon, which I would run each subsequent year. Tomorrow would have been my ninth time.

But I got sick instead. My Crohn’s flared this summer, pain made running difficult, and severe anemia made working out nearly impossible. So I didn’t train, and my body weakened, and I am working my way back. 7 minutes one day, 8 the next. I am up to 17:30.

I have told this story before. I want to tell it again. I want to shout out my heartbreak that I can’t run this weekend. I want everyone to know that I have been wronged.

No one tells you that there is no prize for hardship, no matter how eloquently you tell people about it, no matter how tragic a figure you cut. In the end you are still complaining, and the purpose of sharing your story fades with every iteration.

No one tells you that most of the time there is no one to blame for disappointment, and even if there were you could never punish them in a way that would gain back any of what you have lost.

No one tells you how badly you will want someone to punish.

“You are the expert on being super healthy and suffering anyway.”

Someone wrote that to me in an email a few years ago and it took my breath away. She was asking about food choices, special diets, and how they affect health. Her observation was an aside, followed by an emoticon indicating some whimsy in the statement. I appreciated the sentiment.

No one tells you how much people will badger you about what caused your pain. One acupuncturist was almost belligerent when I couldn’t tell him that there was a trigger for the development of this disease in my thirties. I can’t say I blame them; if they can find something that I’ve done wrong then it means they might be safe from such vagaries of health.

“I’m really glad you are feeling like yourself again.”

My doctor said that to me on the phone earlier this week. Its true: I am feeling more like myself. I am running and working out, I am writing and seeing friends, I am making my way through my to-do list and not collapsing on the couch in the late afternoon.

But my first thought when he said that was How the heck would you know what “myself” feels like? You don’t know anything about me other than that I am sick.

No one tells you that coming back to health won’t feel like a triumph, it will feel like justice. It will feel like the world righting itself. It will feel like settling back into whoever you were, but maybe in a new skin, slightly changed, warped and distended by whatever stretched you to your limit, but full again with that which makes you yourself.

No one told me how much I would cry this week, knowing that this race, a personal challenge that had become a tradition, was going on without me.