After John had been arrested,
Jesus came to Galilee proclaiming the gospel of God:
“This is the time of fulfillment.
The kingdom of God is at hand.
Repent, and believe in the gospel.”

As he passed by the Sea of Galilee,
he saw Simon and his brother Andrew casting their nets into the sea;
they were fishermen.
Jesus said to them,
“Come after me, and I will make you fishers of men.”
Then they abandoned their nets and followed him.
He walked along a little farther
and saw James, the son of Zebedee, and his brother John.
They too were in a boat mending their nets.
Then he called them.
So they left their father Zebedee in the boat
along with the hired men and followed him.  – Mark 1: 14-20

The Gospel was apt Sunday night. From the Gospel of Mark, of course, the frenetic, no-frills Gospel that propels us through the story whether we’re ready for it or not.

Jesus says it’s time. Jesus calls people away from everything they’ve ever known. They follow.

It was less than a week ago that we decided on surgery. Too much pain, too much throwing up, and a trip to the ER finally convinced me, and I miraculously made peace with the procedure that has hovered over me like disaster for the past three years. All I could think since the moment I awoke from my colonoscopy to hear this unexpected diagnosis was “I don’t want to have surgery”.

Suddenly I am having surgery, and I am ready.

They will make a few small incisions. They will take out the part that doesn’t work any more. They will secure everything with titanium staples and have me out of the hospital in a few days.

The disease will most likely return at some point. There’s no way of knowing how or when.

I was directing the choir that evening, and they were singing beautifully. We rehearsed everything, including the classic song of calling, The Summons.

Will you come and follow me if I but call your name? Will you go where you don’t know and never be the same?

My fiancé started a new job this week. He finally got a job in Boston, like we have been praying for all these years. I have been scared to be grateful, because if I am grateful for this blessing does that mean I blame God for all of my ailments? No, it doesn’t mean that at all.

He will sit at my bedside after his shifts covering the blizzard that is closing in on Boston. In a few weeks we will close on a beautiful condo in the city. In a few months we will stand before the altar and so many people we love and knit ourselves together in sickness and in health, until death do us part.

I need graces I don’t know how to ask for yet.

Will you leave yourself behind if I but call your name?

I missed the first two masses of the semester because my symptoms were so bad. I knew that the chapel had been rearranged and asked the student leaders to show me where they had decided to place the choir while I was away.

Though it is disruptive, I am a fan of trying new liturgical set-ups. How will we know what works if we don’t try?

After our rehearsal the choir rushed out to the first two rows closest the piano. The chapel was now set up in the round, with the ambo opposite the altar. I thought I was ready for anything, but I was extremely disoriented. Where would I put my music stand? How would I stay out of the way of sight lines? How would I keep from being a distraction? I have been praying in that chapel, with the same old set-up, since 1999. Now everything had changed.

Where was I supposed to be looking? Is it possible I don’t know how to pray anymore? 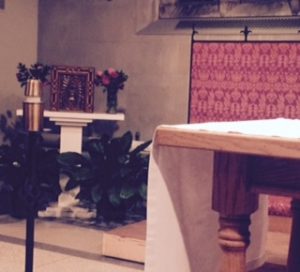 Lord, your summons echoes true
When you but call my name.
Let me turn and follow you
And never be the same.
In your company I’ll go
Where your love and footsteps show.
Thus I’ll move and live and grow in you.
And you in me.

I can’t remember having resisted Jesus’ call. I have always listened, and followed. It’s just that I thought that once I set out on the road, once I left my nets behind and committed to a life of discipleship, that the road would be smooth and straight. I was so foolish and naïve.

I survived mass without crashing into anyone or standing awkwardly in the middle of the circle. I got hugs from my choir and friends and got prayers from the assembly at the end of mass. I didn’t call my sweetheart, since I knew he’d be sleeping before his first day of work.

As I walked to my car it occurred to me that I have never thrown up in the bathrooms at the church. I have assaulted bathrooms on four continents with the evidence of my illness, but somehow that church has escaped.

That must mean something, but I don’t know what, so I let the thought hang there in the air as I drove into the night, in the air that was just starting to smell of the expectation of snow.