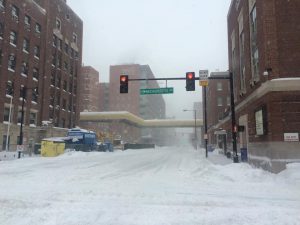 It has been seven years since I had major surgery after a long illness, surgery that put me on a path to healing. Usually on this anniversary I re-share certain pictures on social media, remembering the massive amounts of snow, the companionship of my family who walked with me through terrible weather to the hospital, the toll that illness had taken on my face and body which you can see even with all the layers I’m wearing in the snowy photos.

With seven years distance there are so many other stories.

I felt brutalized by needing a temporary ostomy. Adjusting to the appliance, plus being buried under storm after storm that snowy winter, plus living in a basement studio made me very glum. Though I was able to have the ostomy reversed, I felt survivor’s guilt knowing that many people deal with it for their entire lives.

My body got healthy again, which meant it got heavy again, and my compulsive thoughts turned to how disgusting I was. People told me I was beautiful as I was wasting away, and they meant it. What would they think of me now? I still wonder what people think when they look at pictures from my illness. I race to tell people how sick I was then, so they know I’m not a slob, I’m not a degenerate, I’m not any of the things people are too polite to admit that they think when people gain weight.

This all felt like injustice, just as it did when my body was ill. There is a way that the world is supposed to be and a way I am supposed to be in it. When instead of being competent, healthy, and stable, I am scattered, lost and unproductive then my world is upside down, not how it ought to be. Now that the world has righted itself, I know that it could all happen again. 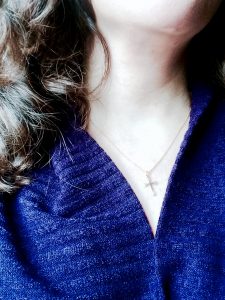 I am changed. My need to share my story led me to be a better listener. My willingness to talk about my body without shame led others to open up to me. My recognition of my own fragility led me to tread more lightly in the world, with a confidence that comes from knowing how precarious it all is. It led me to know more deeply the Gospel truth of being blessed and broken.

The devotion of my family and friends opened my eyes to how loved I am, and that I don’t need to be healthy or skinny or productive or any type of way for them to stick with me. As I look back on a time of misfortune, those hardships are subsumed by how fortunate I really am.