The latest dust-up in this distressing election cycle has been Donald Trump’s fat shaming of a former Miss Universe, Alicia Machado. His comments and attitude are disgusting and demeaning: even if you argue that the “job” of a beauty queen is to stay beautiful, there is no evidence she has ever been anything but. Trump can’t even be bothered to make that argument, he just assumes we will take his word for it that weight gain is, in his words “a real problem”

Amid the torrent of emotions that I have felt observing how this woman was treated (and is being treated), there was a peculiar wave of relief: now everyone will know, I thought, Everyone will know how hard it is to be a woman and constantly feel shame for your weight. There is no way they can ignore something so egregious.

It’s no secret that throughout a wonderful life full of friendship, service, accomplishment and love, I have also surrendered some of my attention to a near constant stream of self-criticism for my weight and appearance. I had just learned to turn that tape off when I fell ill, lost 40 pounds, was praised for it, got well, gained most of it back, and had to start the process of self-acceptance all over again.

In one of the many soundbites dug up on this decades-old indignity, Trump describes Ms. Machado as “someone who likes to eat” in a disapproving tone. Again, he doesn’t back this up with any rationale as to why he is chiding her for this. It is assumed that a woman who likes to eat has something wrong with her.

I always liked to eat, though there were years when I couldn’t eat because my digestive system didn’t work. I still went to work, but I napped during my free periods and rushed home to lay on the couch in pain and anemic exhaustion every evening. Other parts of my body stopped working right. I lost half my hair. I passed out at church. I passed out on stage.

(People told me I looked great.) 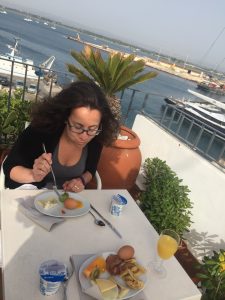 Finally, during a blizzard, my doctors took me apart and put me back together again, and I became once again a woman who loved to eat. I joined friends for dinner and ate my fill of sautéed kale. I cooked corn on the grill with my husband. I ate pizza with as many veggies as I could fit. I drank beer. I gained weight. Enough that some would say it was “a real problem”.

I also started running again, and have run three half-marathons since my surgeries. I got back into power yoga. I hiked Mt Etna. I took on new projects and worked late. I took every audition I could and didn’t struggle in rehearsals. My hair grew back and it looks great. I don’t get lightheaded and I don’t pass out. I travel with my husband and don’t worry about getting sidelined by sickness or pain. I fill my days with people instead of lying on the couch. These are things that a woman who likes to eat can do. 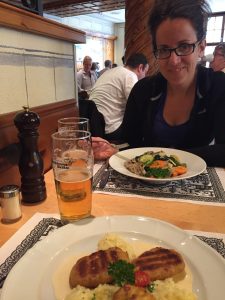 Which is my way of saying there is nothing wrong with being a woman who likes to eat. In fact, there may be something about it that is very, very right.

What did you think of Trump’s comments about Alicia Machado?