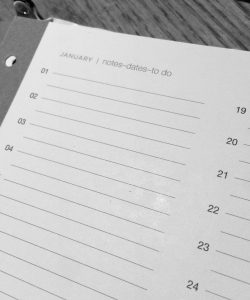 There are certain chores that fill me with existential dread. Unloading the dishwasher is one of them. Every time I do it I think to myself “I will do the same thing over and over for the rest of my life. Life is an endless cycle of tasks from which we are never free.”

I don’t feel the same intensity of dread every year when the calendar page turns, but the sentiment is similar. Any resolutions I could make would be some form of the same ones I have been making for years. They will be the same struggles the next time the earth completes a revolution around the sun.

No matter how much I dress them up, my commitments are focused toward the same personality deficiencies that I have compensated for my whole life. Don’t be so impulsive, don’t overindulge, don’t always say the first thing that comes to your mind, don’t be self-centered, don’t squander your talents.

A perverse benefit of age is becoming better acquainted with one’s flaws. My mistakes are rarely a surprise to me any more, they are just manifestations of the same old issues. Angrily beeped at another driver in the rotary? Been there before. Insulted a friend by running my mouth? At least I have plenty of practice in apologizing. Left a party realizing I’d dominated conversation? I’ll make sure to listen more carefully next time I run into those friends. Waited two weeks to write a blog post that should have been done around the first of the month? Well.

I comfort myself over this constant need for self-discipline by imagining waking up every day to a new set of peccadilloes. That sounds even worse.

We are naturally drawn toward drastic transformations, but every revolution has it’s fair share of drudgery. A manifesto is written with a pencil that was sharpened over and over. A march is putting one foot in front of the other.

I’ve come to see that’s how it is with holiness: we stumble toward sanctity with the day-to-day refining of our hearts. Perhaps that’s not the only path to change, but it’s the only one I’ve found so far.