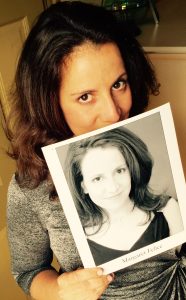 Not long ago, getting ready for an event at which I had to dress and act professionally and convince people of my qualifications, I was hit with a wave of insecurity. I was in the shower (where many existential crises take place), and was overwhelmed by the fear that everyone at the event would “see through me”, whatever that means, and know that I didn’t belong.

Instead of spiraling, I recognized that for what it was. “Imposter syndrome,” I thought, remembering that for the first five years of my performance career I felt like an imposter every time I stepped on stage (until I realized everyone feels that way).

Artists have a reputation for being crazy, but in that moment I realized the opposite is true. By putting ourselves out there and becoming well-acquainted with the highs and lows of a risky career, we are actually more capable of dealing with emotional setbacks than your average person. A few more examples:

I spread rejection on my bagel in the morning and eat it for breakfast. More than a decade into performing and I have made rejection the drumbeat to which I march. Rejection is actually a good thing – it means I am getting to plenty of auditions, reaching out to lots of producers, and hustling. And I learned that the only thing that truly makes me feel better after rejection is not a dirty martini or pint of ice cream: it is sending out more résumés!

When I began writing more seriously and started submitting my work, rejection naturally poured in. In another life I would have pouted and stewed, but I’ve learned that’s a waste of time. The more often you hear no, the easier it gets. And if you can keep trying in the face of that, then congrats, you’re fit to be a creative.

I used to fret over what directors wanted me to look like at auditions, until I realized that what they wanted didn’t affect what I had to offer: brunette, average height, big forehead, sturdy body with a tendency toward pigeon toes, and a lot of hair. Part of acting is learning to embrace one’s type. I wished for a while that my type was sweet and slender blonde ingénue. Then Tina Fey got famous and my type was cool again for a while.

Lots of women go all out for their wedding with makeup artists and all that: I went to Clinique the week before, let the lady sell me some stuff, and slapped it in the hotel bathroom just before we left. I couldn’t possible need as much contour as I do under stage lights, I reasoned. And there was no way that wedding day was going to stress me out worse than Headshot day usually does (you mean I have to pick a day on the calendar and be pretty???)

Regardless, being a performer makes you reckon with those anxious demons real quick. You want to follow your passion and perform? Then get the heck over your anxiety. Most likely, no one is paying enough attention to notice if you mess up, and if they do, what is the worst that can happen? Nobody ever died from wrecking a high C.

You learn a lot about self-awareness from performance anxiety too: if you really truly can’t handle being out in front of people, maybe you aren’t meant to be a performer.

Fear of Missing Out

Recently I auditioned for a show and didn’t get called back. The day of callbacks a friend posted on Facebook about them, and tagged every other person who had been there. I died inside: look at all these people who are my friends and who are also better than me and who are having a great artistic experience while I feel like failure in my bathrobe!

Honestly, you need some strong emotional resources to deal with artistic FOMO: you want to hate these people who are participating in something from which you were excluded, but they are your friends! So you suck it up and go to the show and cheer them on and have to put the disappointment aside. If you think artists are crazy maybe this is why?? But we do it and are stronger for it.

Next time you are freaking out, maybe ask an artistic friend for some perspective. They’ve probably dealt with something like it a thousand times before, and have gone on to fight another day (and sing another audition).

Performers, what are some of the life lessons you have learned from your art and career?