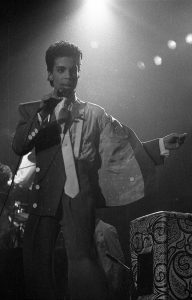 Prince Rogers Nelson: gifted, prolific, collaborative, entertaining, and now gone much sooner than any of us expected.

Aside from having his “7” on cassette single, I can’t boast of having followed his career too closely. Still, listening to the tributes and being reminded of his output, I am struck by two lessons that inspire me to be a particular kind of artist.

Have integrity, and be generous.

Prince did his thing. Rather than using his tremendous musical talent to wedge himself into a conventional pop star mold, he pushed ahead with his own sound, look and mystique. He maintained control of his image and brand, which is no easy feat in the music industry (or for that matter, in pop culture).

Having integrity is not just a triumph, it is a gift to the world. There are a handful of popular artists and bands who have used their social capital to drive pop music to new frontiers. Most of these came to fame by making music that was conventional at the time (think the Beatles, the Beach Boys). Prince never fit that pop icon mold, but he became an icon nevertheless.

What we hear over and over is that by being himself, Prince allowed others to feel they could be themselves. By packing tons of charisma into a look that wasn’t “supposed to be” attractive, he turned the notion of what was alluring on its head. In a sex-saturated industry his expressions of sexuality were transgressive because they weren’t exploitative. And by being comfortable in his skin, he could lift up others and share freely.

This element of generosity has rightly been a focus of recent tributes. He included women in his band and promoted female artists. He worked for peace and justice and became involved in activist movements throughout his career. Most notably though, he entertained us. He got us dancing. If that were his only legacy that would be more than an average life’s work, but he offered so much more inspiration in his extraordinary and too-short life.

Image of Prince from 1986 by Yves Lorson from Kapellen, Belgium (Prince) [CC BY 2.0], via Wikimedia Commons