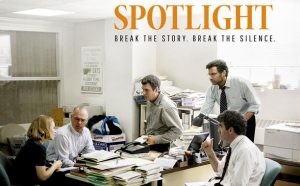 I saw Spotlight during its initial limited release in Boston before Thanksgiving. It took me a month before I knew what I wanted to say about it, and almost another before I found the nerve to write it all down. I get up and wander around, I check my phone, every few words because I’m not sure I can tackle this. I’m not sure I should.

I was 21 when the sex abuse scandal broke in Boston, living, studying and working across the street from the Archdiocesan chancery. I was an upperclassman at a Catholic college, raised in a family that made the local parish a part of our lives, and this news horrified me. People had been hurt by representatives of an institution I dearly loved, and that same institution had not done enough to protect victims.

Horrified, but not exactly surprised: it’s not that I expected such evil in the church, but that I knew that evil could pop up anywhere. I wasn’t old enough to be set in my ways, but was old enough to have my foundation shaken by this news. A few months prior had been the attacks of September 11, and both of these have combined in my memory as a shock so severe that I can barely remember a life before the bottom fell out.

Locations and even people I knew were featured in Spotlight, and I was eager to see it almost as a penance on behalf of my community. The catchphrase “never forget” has unique urgency when the safety of children is at stake. I knew part of me would be humiliated by the portrayal of such sin.

The film was extraordinary. My journalist husband commented that they nailed the process of reporting, as they should have since it was based on a book by an investigative reporter. I don’t have anything new to add to the complaints that some people were portrayed as unrealistically villainous in order to heighten the drama. Skeptical newsers were heroic, Catholics were scheming or stupid.

I left the theater with a pit of grief in my stomach, hurting again for the abused. But that was where the resonance ended.

There was something in the movie I had expected which was missing. What was missing was me.

Forgive my narcissism. It wasn’t until after I saw the film that I realized I was expecting to see the struggle of those of us who stayed in the Church portrayed amid all the other struggles in Spotlight. What does it mean to love your community, to believe that your community mediates the divine, and learn that part of that community has gone rotten?

Though it excelled in demonstrating the nuanced guilt of the Globe staffers who had ignored the problem previously, there was no nuance in most of the other characters, and I felt indicted as a person of faith by the closing credits.

Maybe that was intentional. Maybe it was deserved.

It is silly to expect someone else’s words to tell my story. The story that was told is of utmost importance. And the parts that were missing: those are my story to tell.

I have tried to tell the story of collective guilt and grief. I have tried to speak of the confusion and inexplicable devotion that kept me and so many others in the church. I have told people to pay attention, to be close to those who are vulnerable, to live in such a way that abuse could not go unnoticed.

This is not just my story to tell, it is my story to live. Onward we go, devoted to this messy, broken body of Christ. I am grateful for the art that calls to light our darkest parts, and I know that if that light is to continue shining I have a role in it, and a stake.