Reposting this post on the Magi from six years ago, in honor of today’s feast of the Epiphany. In understand this poem better now. 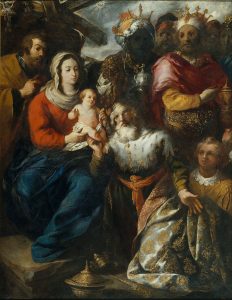 “A cold coming we had of it,
Just the worst time of the year
For a journey, and such a long journey:
The was deep and the weather sharp,
The very dead of winter.”
And the camels galled, sore-footed, refractory,
Lying down in the melting snow.
There were times we regretted
The summer palaces on slopes, the terraces,
And the silken girls bringing sherbet.
Then the camel men cursing and grumbling
And running away, and wanting their liquor and women,
And the night-fires gong out, and the lack of shelters,
And the cities hostile and the towns unfriendly
And the villages dirty, and charging high prices.:
A hard time we had of it.
At the end we preferred to travel all night,
Sleeping in snatches,
With the voices singing in our ears, saying
That this was all folly.

Then at dawn we came down to a temperate valley,
Wet, below the snow line, smelling of vegetation;
With a running stream and a water-mill beating the darkness,
And three trees on the low sky,
And an old white horse galloped away in the meadow.
Then we came to a tavern with vine-leaves over the lintel,
Six hands at an open door dicing for pieces of silver,
And feet kicking the empty wine-skins.
But there was no information, and so we continued
And arrived at evening, not a moment too soon
Finding the place; it was (you may say) satisfactory.

All this was a long time ago, I remember,
And I would do it again, but set down
This set down
This: were we lead all that way for
Birth or Death? There was a Birth, certainly,
We had evidence and no doubt. I have seen birth and death,
But had thought they were different; this Birth was
Hard and bitter agony for us, like Death, our death.
We returned to our places, these Kingdoms,
But no longer at ease here, in the old dispensation,
With an alien people clutching their gods.
I should be glad of another death.
– T. S. Eliot, the Journey of the Magi

If you’re looking for a way to get me riled up, hide one of my favorite books. Two nights ago I couldn’t find my edition of T. S. Eliot. It was Epiphany and I wanted to read “Journey of the Magi”. I had done a ferocious cleaning before I left for the holidays and was terrified I had thrown the book away. I was preparing to dump everything in my apartment onto the floor when I found Selected Poems on a shelf.

Like a good girl I read Journey of the Magi, which to be honest has never been among my favorites. The opening sections on their journey and arrival in Judea are richly descriptive, beginning with the hook that has always reeled me in: A cold coming we had of it. The end of the poem is where the language takes my breath away – the repetition of words and phrases, the stark expression of the Magi’s harsh and bitter agony. As enamored as I am of the language in that section, I always end my reading dissatisfied, wondering “what the hell do they have to be so distressed about?”

In the same pile as my poetry and journals I keep a small photo album that was a Christmas gift years ago. My brother made me the album in grade-school art class, writing my name on the front in puffy paint. Before I returned to Boston that year I filled the album with photos of my family over the years. My toddler self looks up at my father in one of the photos as he makes a face back at me. There are group photos of cousins, my mom yelling at my uncles, my dad hiding behind a cereal box while my brother displays the half chewed contents of his breakfast in an open mouth.

I looked over those photos on Epiphany because they had surfaced in the scramble to find the poems. I wished I had those whiny wise men in front of me so I could shake them, point to a 20+ year-old photo of myself and my grandmother and say “Look, this is the Incarnation! Look how good it is!” Still pretty irked at the wise men, I took a day to think about it. Since I first read Journey of the Magi I have been haunted by that last stanza. I am moved by the beauty of the text but could never get behind the dark conclusion to the adventure of the Magi. What about their journey could make them feel so…Prufrockian?

And then, appropriately, an epiphany.

We returned to our places, those kingdoms, but no longer at ease here. The Magi followed their guts, their instincts, that star, having an adventure, exploring a mystery. And then they went home, having played their part in salvation history.

“Every great getaway has a moment when you want to pack it up and stay. That’s how I ended up with a timeshare in Port Arthur, Texas.” (Jack Donaghy) Our lives take certain tracks from which significant deviations are not always possible. These tracks are valorous, beneficial. We live in webs of relationships, alliances and dependencies, and when we glimpse another good life that is not ours, we can’t rip ourselves from the fabric into which we are knit. The lives we return to are tainted once we’ve tasted something else. Like the Magi we may be a little less at ease, and perhaps a little less attached to the lives to which we are bound.