Many years ago I visited Pompei. I knew that my grandmother had been born in a small town not far from nearby Naples, and as our bus drove around the city on the autostrada I looked up into the mountains and imagined. I imagined what it might have been like for a girl in a remote town many decades ago, and I imagined that someday I would go back.

Nearly twenty years later I realized that imagining. On a Sunday in June my husband and I drove north from Naples toward the city of Caserta, and continued into the mountains beyond that city. I recognized some of the names on signs as we drove through, including Casertavecchia, which is the location listed on my great-grandparents marriage record. It is of some interest to tourists, but we didn’t stop there, continuing northeast to the village of Casola.

On my grandmother’s baptismal record there is a stamp for Chiesa San Marco Evangelista. I had been able to find a picture of the church online, but not much else. I had hoped to find a mass schedule but even after scouring the Internet it hadn’t turned up. Still it was a Sunday and we were optimistic. As I followed the little blue dot on the iPhone Maps route we were following toward the village, I looked up and exclaimed “that’s it!”.

In a small square, Piazza Rossi, the white church was up a few steps from the road, and the doors were open. We parked on the street and ascended to the vestibule where women in their thirties were walking in and out. I asked “è questa la chiesa di San Marco?”

“Si” a woman replied, continuing by explaining they were setting up for a first communion. 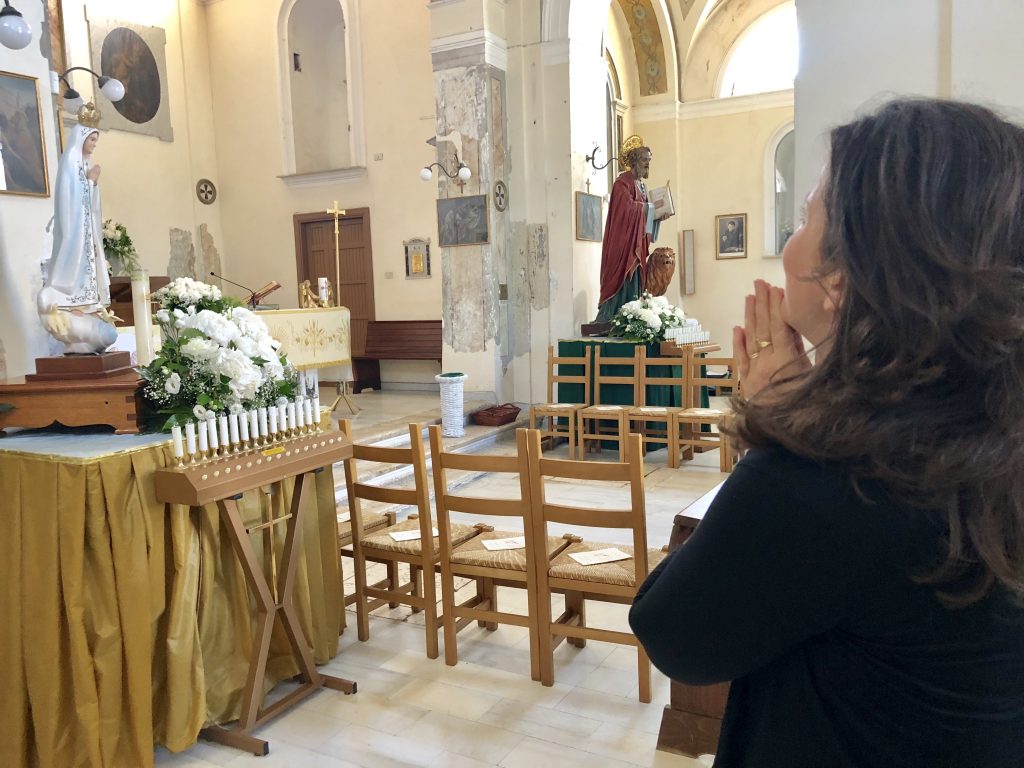 Really all we did was walk around for a few minutes, but I was so full of emotion I was shaking and nearly crying. I hadn’t expected to be so moved by a tiny church with whitewashed peeling walls, a few statues and a few paintings. My grandmother passed more than a decade ago. We were not exceptionally close, though of course I loved her and miss her. So what moved me to tears?

It would be trite to say I was moved by the realization that a story which began in the place I was standing was being continued in my own life. What I was feeling was too monumental to be so self-centered. With all the bustle of set up for the mass, a story that began in that place was also continuing in that place. 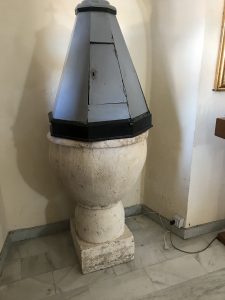 Standing over by the rustic font, I was rattled. It really is true that we start our lives as babies and live those lives the best we can, and if we are lucky we grow old, and then we die.

Seventy is the sum of our years,
Or eighty, if we are strong;
Most of them are toil and sorrow;
They pass quickly, and we are gone.

Teach us to number our days aright,
That we may gain wisdom of heart

We had other things to do that day, so my husband and I couldn’t wait for the mass and decided to drive through the village. Not far down the road another parish was beginning mass, this in the village of Pozzovetere. Their first communion was the following Sunday but their mass was focused on preparing the children, their families and the congregation for what they would experience next week. At the end of the mass the catechist spoke. Her name was Philomena. It all felt very familiar.

Fill us at daybreak with your mercy,
That all our days we may sing for joy.
Make us glad as many days as you humbled us,
For as many years as we have seen trouble.
Show your deeds to your servants,
Your glory to their children.

Driving back toward Caserta we passed San Marco again. The children were lining up for the procession in white robes, continuing, as all of us do, something that had started long before they were born.

All of the quotations above are from Psalm 90, NAB.