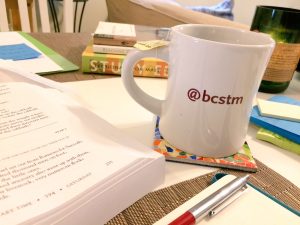 If you want to have your world turned upside down, take the Bible seriously.

Just over a year ago I began an intense writing regimen to prepare the 2019 edition of A Book of Grace-Filled Days for Loyola Press. Every day I would set out the lectionary, my list of readings, my journal and a pitcher of water or cup of tea, and after turning the radio to pop music sit down to write ten entries a day.

It was a bit disorienting to zip through Lent in less than a week, to measure months in weeks (or would that be vice versa?). My challenge was to look at each day’s readings, find a bit of Scripture that I wanted to highlight, and find something meaningful to say about it. It will not shock you that the last part was the hardest.

So what did I learn from pondering over and praying with an entire year of the lectionary cycle? One year later this is what sticks with me. (Don’t worry, there are no book spoilers).

God was not messing around about this “care for the poor” stuff.

Seriously, it comes up everywhere. Reading day after day of psalms, prophets, and Jesus himself stating that God continually opts for the poor and that we should too really drives the point home. About a month into writing I became more disciplined about making sure that I had a dollar in the glove box to give to whomever asked me for it at a stop light.

And I mean whomever. Jesus is not asking me to judge who is worthy. He is asking me to give away what I have and follow him – a directive I, with a home and car and computer, certainly do not obey satisfactorily. Just as God’s generosity says more about divine abundance than our worthiness, so too my weak attempts at generosity are about what God is asking of me, rather than about my perception of those to whom I give.

We should read more Acts of the Apostles.

Here’s a passage that has stuck with me: Acts 18: 24-28, which tells us of the preaching of Apollos. He arrives in Ephesus eager to preach but isn’t quite getting it right. Rather than driving him out or dragging him on Twitter, Priscilla and Aquila pull him aside, correct him privately, and encourage him to continue. Acts of the Apostles is chock-a-block with stories that teach us how to treat one another.

Our whole tradition is in dialogue with Scripture, and we can be too.

Needing to fill about 400 entries, I often turned to what others had said about the message of the Scripture. I looked to writers, thinkers and pray-ers as diverse as Augustine of Hippo, Bernard of Clairvaux, Therese of Lisieux, Benedict XVI, T.S. Eliot, Madeleine L’Engle, Joan Chittester and Brian Doyle to name just a few. Each of them plumbed the richness of divine revelation, took it seriously, and tried to share a bit of what it was all about.

There is nothing stopping any one of us from engaging Scripture just as intensely. God is longing to speak to us in myriad ways, including through Scripture. For months I sat down and had to find something that resonated with me in each day’s readings, whether or not they lit my fire at first glance. It required discipline, but eventually even the driest or most distant passages spoke to me in some way. And through this process I was able to speak back.

This was a transformative process, and put me in touch with the Bible in a more intense fashion than I would ever have found on my own. I’m sure there are more lessons than these three that I have been exploring in the immediate aftermath of this project. I hope I will find the self-discipline in the future to be so intensely engaged with the Bible, and the messages that God speaks through it, ever ancient, ever new.

Are there messages from the Bible that strike you forcefully? How have you allowed them to change your life?