I can’t believe August is here already, but I refuse to allow that to auger the onset of fall. It is still summer, darn it, and if this last month of break is anything like the first two, it should be magnificent. I’m linking up as always with Leigh Kramer, so be sure to read some of the other posts in her linkup. 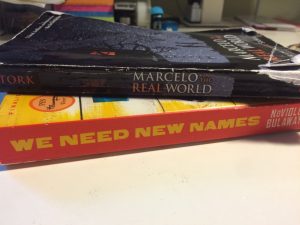 Marcelo In The Real World

I just loved this young adult novel about a teen on the autism spectrum that goes to work at his father’s law firm in Boston. The narrator’s voice is unique and endearing, and the plot is both thrilling and wholly believable. Marcelo explores the way relationships grow during the teenage years, and anyone who has gone through those changes will be able to relate. I was unsurprised to learn that the author, Francisco X. Stork, was Jesuit-educated, because there are many Ignatian themes in the book. In fact, I quoted the book in my post on Discernment for the feast of St Ignatius at the end of the month.

We Need New Names: A Novel

The second book I devoured this month also had a teen narrator with a unique voice. The story begins in Zimbabwe among a group of children recently resettled in the poetically named “Paradise” after the government destroyed their homes elsewhere. The children play and grow amid political upheaval, religious fervor, poverty, abuse and AIDS. In the second half of the book, the protagonist, Darling, moves to Detroit with an aunt, where new friends and American experiences make her a young woman with a foot in both worlds. This is a creative, compassionate piece of adult literature for which the author, Zimbabwean expat NoViolet Bulawayo, won many awards and was named a finalist for the Man Booker Prize..

There was a lot of music in my life this month! I spent five days out at Tanglewood for a performance of Carmina Burana and Daphnis et Chloe, then went into rehearsals for Suor Angelica with Piccola Opera in Concord, NH. Suor was paired with Dido and Aenaes for two performances at the Concord City Auditorium. After Suor closed I had two concerts on the Summer concert programs of local opera companies, joining other singers for quick, casual performances.

An absolute highlight of this very busy month was reconnecting with so many singers I have known for years, and meeting new ones. There are so many talented people in Southern New England!

As much fun as I have, it has been nice to have a little down time the last few days and be able to have dinner with my husband.

I don’t usually recommend TV, because I don’t watch very much of it. However, during July I was glued to the conventions on TV (and, when driving, on the radio. Thanks PBS/NPR!). And because it kept me up too late and frequently distressed me, I am still not going to recommend TV.

Hard to choose one this month, but my favorite is probably this shot from inside St Ignatius Church, before one of the orientation masses for new Eagles at Boston College.

Time for another orientation mass. Let’s make some magic happen.

Nuns on the Bus

The Nuns on the Bus listening tour made a stop in Boston on a hot day in July. The speaking program included many local activists working for better lives for workers and families, and concluded with Simone Campbell, who impressed me last time I heard her speak and was just and positive and inspiring this time. After they spoke I stuck around to help serve lunch before they boarded the bus onward to Providence, and was so happy to spend a little while with a group of women who, with some lay staff from Network Lobby, show how to make a difference and be a person of prayer, kindness, generosity, and love. There are not enough role models like that. 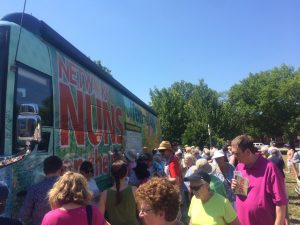 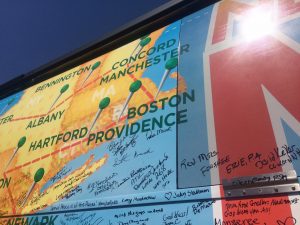 The garden flourishes! We are struggling with blossom-end rot on our squash but have one so far that is happy. Lettuce and arugula are in great shape, cucumbers, eggplant and peppers are coming along, and all of the herbs are enhancing our meals (with the exception of dill, which my husband accidentally pulled out). Our adventure in growing morning glory and moonflower has resulted in zillions of vines, but no flowers yet. 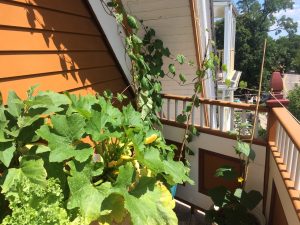 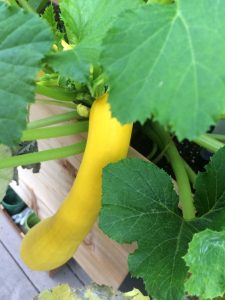 Real talk – headshots are so stressful. They are fairly expensive, we invest way too much importance in them, and they involve looking good. Eesh. I had a great session with Earl Christie Photography and am trying to decide on which one to use as “the headshot” (though you will probably see more than one pop up on my website!) Let me know which ones you like!

What have you been up to this month?

Disclaimer: This page contains affiliate links. Purchases made through these links send some change into my piggy bank at no additional cost to you.