I’ve been way overdue on sharing What I’m Into the last few months, since I’ve mostly been into running Boston Singers’ Resource, performing in The Light in the Piazza and Company, and teaching a few extra classes on top of everything else. I am working harder than I ever have in my life, but still have found time for some things that you might find as great as I have!

Night Driving: A Story of Faith in the Dark by Addie Zierman 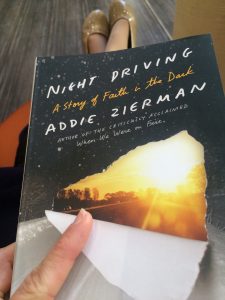 I was honored to receive an advance copy of this lovely memoir. Addie is a great storyteller who merges the story of a low patch in her spiritual life with a road trip with small children. Both of those things are intimidating, but she lightens the story with humor and perspective. She’s realistic about challenges in pursuit of grace. (I linked up with her book launch syncroblog, as her book reminded me that it’s OK to sit in the dark sometimes, and that the simplest things can draw us out).

As a bonus, it has a cameo appearance by Leigh Kramer, who sponsors this linkup.

We are in the early stages of planning a potential trip to Sicily this summer. We’re so early along, in fact, that I don’t have too much to say about this book other than it is light, packed with info, and one of the few Sicily guides out there – such things are hard to find! Stay tuned…

The latest installment from the good Benedictines of Mary, replete with songs both familiar and unfamiliar. It seems as if the rush to continue to produce after their first “hit” (Advent At Ephesus

), production values have declined slightly, with tuning and balance suffering on certain songs. Palestrina’s Sicut cervus, which is one of my favorite choral pieces, was a particular disappointment. Despite these blips, I really value each of these collections that provide me with seasonally appropriate music to use in class, on retreats, and in my own prayer.

The day the Pope joined, so did my husband and I. I took to it like a fish to water. Come to think of it, I should find a picture of a fish in water and post that.

When your colorblind husband refills the soap.

(In other words, I’m trying not to let it take over my life). 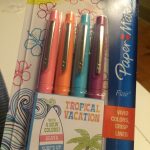 What’s better than a good pen? I like the paper mate felt tips and treated myself to a few in funky colors. Since there is snow on the ground right now, and it’s April, I’m happy to have something to remind me that there is such a thing as warm weather.

I count my blessings every day that I come into work at a school full of good hearted teachers and students who are supported by the institution in their academic pursuits. Those blessings were multiplied this year as we hosted both Sister Simone Campbell of Network: A National Catholic Social Lobby (A Nun on the Bus) and Bryan Stephenson, of Equal Justice Initiative and author of Just Mercy. 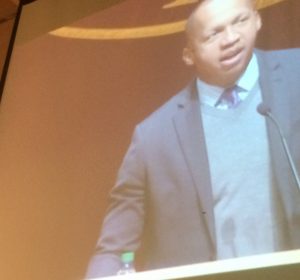 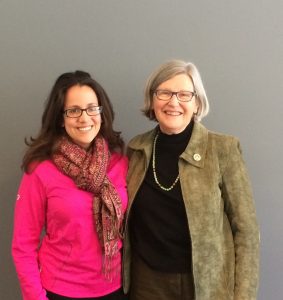 Both of them are beating the drum for justice in different ways, and I have copious notes from both of their speeches that I hope to write out and post at some point. A through line that connected both was the focus on relationship. Sr. Simone talked about listening to the stories of others with holy attention, and Bryan Stephenson spoke about the importance of proximity to those who are struggling. Both of these inspire me and should be part of the spiritual lives of anyone committed to serving God and helping others.

So where will you find me the next few months? In April I am performing in a concert in Southern New Jersey; tickets are still available! I will also be staffing the BSR table at the upcoming Classical Singer Convention in Boston at the end of May, and I hope you’ll come say hi. Also in May I’m singing Bach in Wellesley, and running the Mystic Half Marathon (but don’t come see me there. I’ll be gross.)

What have you been into, and what’s coming up?

Disclaimer: This page contains affiliate links. Purchases made through these links send some change into my piggy bank at no additional cost to you. A Purposeful Path was provided to me by the publisher with no expectation of a favorable review or promotion.