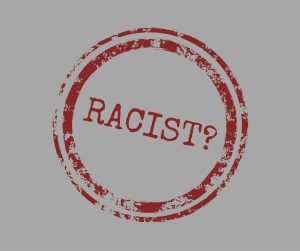 I have been accused of overusing the word “racist”. While this may or may not be true, what is usually implied by this criticism is not that I am overusing it, but that I am misusing it. “Nobody said they hate blacks/Asians/Hispanics/’those people’, so it’s not racism” is the nature of the criticism I get.

While being a hateful bigot is related to racism, those two things are not synonymous. As many have explained before, racism is a system that privileges one race (in our country, whites) and maligns or mistreats other races to maintain that privilege.

So, when I say something is racist, usually what I mean is that it is reflecting, promoting, or confirming the racism that already exists in our culture.

This has quite a few implications for those of us who benefit from white privilege, especially since we are less likely to perceive racism because everything seems hunky-dory. First, it means that our default setting will likely be complicit in racism.

When we think in terms of “those people” or make assumptions about black mothers or hear an unfamiliar name and don’t really remember it but use “black name” as a placeholder, this is, sadly, average. This is the pathetic status-quo.

Remember in school when you got a C and people tried to make you feel better by saying “hey, it’s average! It’s not bad!” and you knew deep down that it was still bad – this is that kind of average.

So we have to work harder at seeing racism and not participating in it. To use a less controversial example, think about consumerism. We live in a society that encourages consumerism. To not go along with that, we have to be super intentional about not judging ourselves or others by their possessions. We teach our children that buying everything they want is not a path to happiness or maturity. We constantly evaluate our attitudes and actions. Maybe we even participate in groups or movements that try to combat consumerism in our culture.

As we train ourselves in critiquing racism, it becomes second nature. We still slip up, but at least we can see it. Remember that example of mixing up names? Yeah, that was me, a few days ago, when I confused two women with names that are stereotypically black. Immediately I cringed and said “ugh, that was racist” (no one argued with me for using the word, that time).

It’s no good to try to be “colorblind”. I need to be aware of the experiences of people I am talking to (or if I will have to give more attention to remembering someone’s name because I was raised around only white people). Another example: I tend to call students by various monikers: buddy, kiddo, etc, which is how I one day found myself calling a black student “boy”. This would not have been terrible if the student had red hair and freckles, but to say something so racially coded to a black boy was horrendous. I wanted to crawl under my desk and die.

Another consequence of seeing personal racism as a part of a system: when we see acts that are clearly racist, it’s important to look at both the individual and the culture. (I recognize there are those who don’t believe in culture and think the world is a cluster of occasionally connected individuals. I am not going to defend my belief in culture. Besides, if you made it this far you are probably with me at least a little.)

Timely examples: Much of our discussion about race in the last few years has been prompted by instances of people perceiving a threat from a black man or woman, and overreacting with extreme and deadly force. Not only do we need to censure the individuals who commit such violence, but we also need to examine why so many people are “trained” to see black people as a threat and to assume they can assault black bodies with impunity.

It is also worth noting that we have started to enshrine these ideas in legislation. The Stand Your Ground law only requires someone “feel” threatened, not that they actually be threatened. So if you think black people are scary, you’re off the hook.

(Deconstructing that and writing it out turns my stomach. See: White tears.)

Looking at the world and trying to figure out why it works the way it does is exhausting and at times depressing. It can be tempting to take a break, especially if you are not part of a group that is suffering (see: There is no such thing as reverse racism). But we have friends and fellow citizens who don’t get to take a break.

If we are at all committed to living in a just world, we don’t get any pats on the back doing any of this. To quote the Gospel of Luke “We are unprofitable servants; we have done what we were obliged to do.”

Neither should we seek congratulations for “accepting diversity” when really all we have done is accept people who look different than us but act like us. Complimenting a black man for being articulate or a Mexican-American for speaking English well only reveals that you expected something else of them, and that you put a value judgment on that difference.

Like-wise, tsk-tsking a young black man who wants to wear a style of clothing that you don’t wear or uses slang that you don’t use only reveals that you are isolated from his community and you put a value judgment on that community.

(Also, don’t ask for congratulations when you like something that was designed for you to like it and want to pay for it. No one gets a cookie for knowing how to pronounce “pho” or watching a Tyler Perry movie – not that there is anything wrong with those things).

The more I write, the more I can read this as self-indictment, and of course at times I stand as another depressing example of the appalling averageness of white privilege. So I’ll stop and tell you now what you probably already know, that you should not be learning all about racism from a white lady, no matter how woke she may think she is.

If you are tempted to take that to mean that you should start demanding the non-whites in your life to explain racism for the millionth time, please do no such thing. We have the internet now! And you can hear from writers and politicians and pundits and people on Facebook and bloggers! Read and listen, seek out experiences that are beyond your comfort zone, critique racism and call out prejudice when you see it. Don’t ask for a gold star. Try to figure out how to help, and do it.

I am taking all of the advice above, and hoping to be better than average, so that someday when the arc of our moral universe finally bends all the way to justice I’ll know that I was on the right side of it. Let’s all get to work.