It’s a dangerous time to have a thought.

In the aftermath of a tragedy, for whatever thought you have, there are plenty of people willing to tell you that it is wrong.

The internet is not a place where people assume you mean well.

I wrote those words four years ago when innocents were massacred in Newton, when inexplicable violence forever divided the history of my home state into “before” and “after”. I thought of them again last night, when I heard the familiar raging on the internet about people not caring the right way about the mess of our world. How could you care about one thing and another thing? How could you support one community and not another? How could you say x, or y? How could you not say anything at all?

As someone who hates both criticism and fighting on the internet, this is paralyzing. I really want to say the right thing in a world where even the right things are wrong because they are not other right things. Yet last night as I went down the rabbit hole of social media I suddenly found myself comforted by the rage and the conflict splashed across timelines and feeds: why should there be a right thing to say when the world is so wrong?

When we are terrified and grieving, when we are angry and shocked, is there a truly right thing to say? Does it deny the complexity of our broken world to think that any of us could be exempt from criticism? Everything should be wrong when the world is wrong.

Then we woke this morning to more terrible news of a mass shooting in Dallas; to a world a little more wrong.

And even though there are still so many wrong things to say, we still try to use our words to put the world back together. Our hearts draw us out of ourselves and into compassion for others as we say the names of Alton Sterling and Philando Castile and we mourn for murdered police officers and for the victim of a shooting in my neighborhood yesterday and try not to be afraid. We say that black lives matter, that too many of our friends and neighbors live with the violence of injustice in what is called the land of the free.

I do my best to drive away the worry about the wrong thing to say and to follow my own conscience: am I speaking from love? Am I speaking for justice? Am I showing a preferential option for the poor and vulnerable? Am I acting as well as speaking (or tweeting)? Am I calling out injustice where I see it? Am I being prudent? Am I listening more than I speak? Am I sensitive to the criticism of those with experience I don’t have? Am I able to accept that it’s really not about me or my comfort, but only about how I can be a champion for goodness and love?

Am I able to accept that maybe the best I can do in a hurting world is to say the least wrong thing? 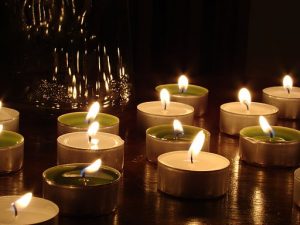 Defenceless under the night
Our world in stupor lies;
Yet, dotted everywhere,
Ironic points of light
Flash out wherever the Just
Exchange their messages:
May I, composed like them
Of Eros and of dust,
Beleaguered by the same
Negation and despair,
Show an affirming flame. – W.H. Auden, September 1, 1939