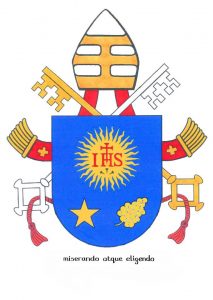 I’ll be spending the morning reading the highly anticipated papal encyclical Laudato Si today and hope to be sharing more in this space and on Facebook and Twitter.

Edited to add: some of my favorite quotes and commentaries are compiled on Storify.

Many pundits have been saying that the Pope’s encyclical Laudato si, which takes it’s incipit from a prayer of St Francis in 13th-century Italo-Umbrian dialect, is about climate change. Some have said it’s about the environment. As I lay awake last night like a kid before Christmas morning, excited for the release of the document, I had another thought.

It’s about how we treat each other.

The whole point that the pope is trying to make (and which other religious leaders have tried to make through their writing on Catholic Social Teaching) is that damage to the environment causes damage to people, and it’s the most vulnerable who are hurt the worst.

It’s so much easier to think of the poor as an abstraction, to throw money at the problem from time to time. We want that to be “opting for the poor and vulnerable”. But that’s not what Christianity calls us to.

With every choice in our lives we are to make a decision that empowers the powerless. That includes the food and clothes we buy. It includes how we vote. It includes whether we support policies that enhance our lives at the expense of people with fewer resources to defend themselves.

So I believe in the end this encyclical is about the choices we make and how those effect the vulnerable. In that end, that’s what everything is about, isn’t it?

What’s your big takeaway from this encyclical?