I don’t usually like to comment on things unless I have time to write an exhaustive, thorough, well thought out treatment of the topic (which is a terrible quality in a blogger, but not a bad one in a thoughtful person, I suppose). But I can’t help but comment on one of the responses I keep hearing to events in Baltimore (and to Ferguson, and on and on).

If you don’t understand, instead of being smug, you should be grateful. 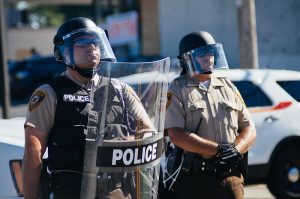 Image: Police in riot gear in Ferguson By Jamelle Bouie [CC BY 2.0], via Wikimedia Commons