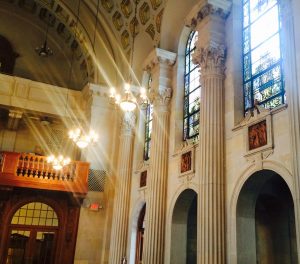 A year ago I took my younger choir to sing in the beautiful chapel of the old Jesuit retreat center outside of Boston. Another example of Jesuits adapting to meet current needs, the center has morphed into not only a retreat center but a retirement home and nursing home for elderly priests. It is a beautiful place in spirit and in structure.

When we sang there a year ago, a co-worker of mine had died the weekend prior and I was to coordinate music for her large, tragic yet uplifting funeral the following weekend. We sang on a Tuesday, I was very sick on Monday and Wednesday, and would start to show symptoms that didn’t really go away until I had surgery six weeks ago.

I remember so much about being there. I remember what I wore. I remember having a slice of pizza after and wondering if it would affect my symptoms. In retrospect I don’t think it did.

A few days ago I had a test done to see how my internal healing has progressed. I put on my hospital bracelet in good cheer but ended up gloomy as I realized that this procedure was going to be unpleasant. If I were a different kind of writer I would write out every gory detail, but I believe there are somethings you can be spared, and are perhaps even worth keeping private.

I gasped a few times in pain, but my tears were from emotional rather than physical discomfort. The nurse had commented “you are so young for this!” when I explained to her why I was there; it was hard not to think “why me?” when I lay in pain and two johnnies on the hard exam table in radiology.

Even as I cursed whatever caused this chain of inconveniences, humiliations and wounds, and wondered how I was chosen for such a spell of bad luck, I laughed at myself and my melodrama. I wondered if I should measure hospital visits not in five stars but in the number of times I ask “why me?”

That afternoon my choir returned to the same gorgeous chapel at the Jesuit center. The sun spilled in through the windows as it did the year before. There was no pizza – cookies this time – and I had a small snack without worry.

One piece was a fairly simple contemporary song that my amateur choir sings well. They looked up and had bright faces. They did not sing with perfect choral technique. Their voices reached past me to the men who live at the center and the other few guests who had stopped in for our performance. The energy and sound pushed me back a little, made me stand up straighter.