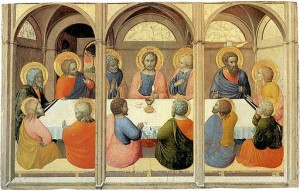 Then Jesus took the bread, blessed it and broke it, saying “This is my Body, which will be given up for you”.

And then one of the disciples rolled his eyes and nudged his buddy under the table, as if to say “here he goes again.”

I have always loved mass, and as is the case with so much of my childhood I am only now starting to understand why I was drawn to this holy action from such a young age.

In some ways, the answer is simple: I met God there. I met God through the spectacle of what we did week after week, through the recitations, postures and song. We took the simplest things – bread, wine, water, and words – and combined them in ways that are stuffed full of meaning and power. To outsiders this may look bizarre or even silly, but generations of people have learned the force of being swept up in the liturgy.

A few weeks ago I had an MRI, which regular readers will remember because I made a big deal about how much I was dreading it. As I was rolled into that infernal tube I thought to myself This isn’t that bad. You were being a little dramatic.

I try not to be dramatic in a way that annoys or impedes others. But I refuse to relinquish my right to find meaning in moments. At times, that’s all that drama is: recognizing significance and allowing one’s self to be moved by it.

Christ himself was no stranger to dramatic action, and by all accounts he lived in a way that infused the mundane with importance. For those of us with dramatic flair, that is our challenge and our goal. Does our drama get in the way of our flowering, or does it bring things to life?

Has anyone ever accused you of being dramatic? Do you think it’s positive or negative?