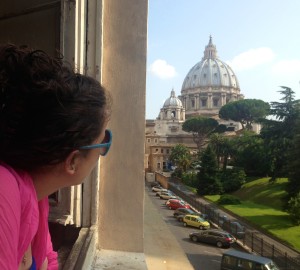 I am a religious person.

I am also rather smart, not that my intellect has anything to do with being religious. Neither does being affluent (or not), creative (or not), political (or not), or curious (or not). All sorts of people are religious. Religious observance is not confined to the desperate, the certain, or the stupid.

The theory of evolution is just fine by me, though I should confess I’m not terribly interested in the origins of human life. I guess I’m too self-centered to worry much about what came before.

When I say I am religious, I mean that my search for and experience of the divine has been mediated through a particular religious community with its own rituals and doctrines. In my case, that community is the Catholic Church.

I am a Catholic, religious person.

No, I don’t feel oppressed as a woman in the Church. I have held leadership positions formally and informally in the Church for most of my adult life. There have been times when I have been treated poorly because of my gender or age, or have been ignored, or have had a man in power say something boneheaded and insulting. These occur outside the Church as often as they do inside.

I really respect the sacrifices that priests make. The vows they take and the lifestyle they commit to are far from the path of least resistance, and the evolution of the responsibilities of your average parish pastor has created unsustainable workloads which require massive skill sets. None of this excuses bad behavior, or makes these men superheroes. The ones who achieve heroism do that all on their own.

As for vowed religious, they’re pretty courageous as well. Anyone taking a vow these days might as well be committing a revolutionary act. Callings to leadership, celibacy, marriage, poverty, and service overlap in surprising ways among the people of God, allowing us each our unique path of discipleship.

Marrying young was not in the cards for me. I have not devoted my childbearing years to my fecundity, but I found other ways to be productive. Something tells me God is OK with that.

I believe life is sacred, that every created human has dignity. Among the issues that make up the seamless garment of respect for life, I tend to focus more on the death penalty and education than I do on abortion. (Catholics are allowed to do that, you know.) I would rather chew glass than associate myself with what is commonly known as the “pro-life movement”, mostly because I find a lot of “those people” obnoxious. But I know that they are trying to do the right thing.

Culture wars bore me, because 90% of the time the munitions used in such battles are oversimplification and generalization, when the captivating truth is always more nuanced.

I don’t cover my head during liturgy, but I always cover my shoulders.

I believe that “the Church of Christ…subsists in the Catholic Church” (Lumen Gentium 8), and I admire that the Council Fathers didn’t quite clear up what “subsists in” means.

Part of being a faithful person is using conscience, experience, and intellect to examine (and occasionally critique) doctrine. As I’ve gotten older, I’ve learned to approach the Magisterium with a hermeneutic of grace rather than of suspicion, and learned that adequate formation of my own conscience is not a negotiable proposition. In other words, I’ve learned that I am not always right, and that Mother Church often is.

The doctrines that cause pain are the ones that touch people’s lives. You don’t see anyone leaving the Church because they’re deeply wounded by the catechism’s stance on guardian angels. We must recognize and honor this pain without losing sight of the grounding that doctrine has in the fundamentals of faith. Dictates large and small exist in a system of belief, and we can’t just get rid of the ones we don’t like without implicitly denying the truths of others.

This is not to say that things never change. But change has always been slow because the Church doesn’t throw out one theology until that theology has evolved into its own replacement. An example of this: the progression of thought about salvation throughout the twentieth century, from foxholes to Father Feeney to Vatican II to kissing limbo goodbye.

I share all of this with you not because I think I am special, but because I’m sure that I am not. There are plenty of thoughtful religious people muddling through the metaphysical world and constructing their lives around the journey. Still, the broad brush paints us as rubes, enablers, victims, and lemmings. People assume I’m either an über-conservative ultramontanist rule-worshipper or an iconoclast spiritual rebel.  Neither of these poles suits me.