Peter Faber was named a saint this week.

I have spent most of my adult life in Jesuit circles, and so was familiar with Peter, one of the first Jesuits. But if you had asked me to describe him I would have know that he was the other one who was there with Xavier and Loyola.

Francis and Ignatius have such exciting stories! Ignatius was hit with a cannonball! Francis was an arrogant snob with gambling debts! And Peter, well, he was there.

Though I’m not one to fade into the background, I can identify with Peter. No dramatic conversion for me, just the long hard work of growing closer to a God I always loved. Not exactly boring, but nothing like falling off a horse, having a leg broken and re-set, giving back all my clothes in the public square, or any of the other exciting stories of the lives of saints.

Faber, who grew up devoted and practiced discernment and chose a life just like the rest of us, led an admirable, noble life. He helped others to pray and he served the people of God. He travelled. He was not boring.

So for all you quiet ones, let him be an inspiration. And if you’re like me, not quite quiet but missing the flair of a misspent youth, may he be a reminder that our conversion continues every day and is always valiant work. 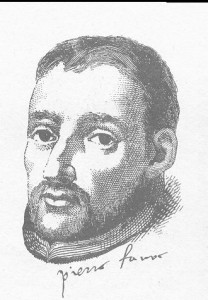