The house that I was raised in began its life as a small cape in the late 19th century. Set on many acres on a busy rural road it had three rooms downstairs and two bedrooms upstairs. Or at least that’s what I’m told. I wasn’t there.

Over time, its inhabitants kept changing the first floor, finishing what was once a room for storing dairy and turning it into a place for people, not butter, and adding a master bedroom and bathroom. By the time my parents bought the house just over a quarter century ago, the first floor had become sprawling and peculiar, while the second floor still had just the two bedrooms and one oddly shaped bathroom.

My first night alone upstairs I had some trouble sleeping, which was not surprising since I was five years old. In the morning I told my parents that I couldn’t sleep because of the airplanes. To my ears, which were accustomed to the quiet street we’d lived on previously, the cars rushing by on the state road we now lived on sounded as loud as airplanes.

In a few years I gained some company upstairs when my brother was born during the last few weeks that I could refer to myself as seven years old. By the time I was eight he was sleeping through the night, and despite my youth I knew that was an anomaly. I didn’t want to mess with it. So began my long quest to avoid waking my brother.

As the older child I had the later bedtime, I was first to have a job and friends that kept me out at night, to come home from college. When entering the house after he had gone to bed, I would very quietly open the front door and close it softly, with the knob turning in my hand so that the latch wouldn’t click in the lock.

The stairs up were steep, but I learned to mount them in the dark. There is a light switch at the bottom of the stairs and one at the top, but I preferred not to take a chance on waking him with even a few seconds of light.

At the top of the stairs came the real challenge: the floorboards. Through years of trial and error I figured a path that would keep me away from the noisiest floorboards and allow me a near-silent passage through the hallway into my room.

Now when I visit, my brother is either not there, or is staying up later than I am. I still find myself going upstairs without the lights on, and walking the invisible maze of creaky planks to silence my footfall.

The past few mornings I have heard someone leaving the apartment building near dawn. All that wakes me is the closing of the door, a sound I heard many mornings when one of our parents was not concerned with waking an oversleeping child. Each time I’ve heard that sound I’ve been confused, and thought for a second I was upstairs in an old farmhouse rather than in the basement studio of an old walkup.

I wake every morning to a life I am happy with.

I guess that’s what nostalgia is, the memory that there was another time when I was happy too. 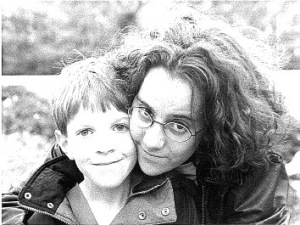