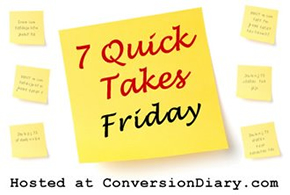 I read this earlier this week and am in love.

“Singers and Musicians are some of the most driven, courageous people on the face of the earth. They deal with more day-to-day rejection in one year than most people do in a lifetime. Every day, they face the financial challenge of living a freelance lifestyle, the disrespect of people who think they should get real jobs, and their own fear that they’ll never work again. Every day, they have to ignore the possibility that the vision they have dedicated their lives to is a pipe dream. With every note, they stretch themselves, emotionally and physically, risking criticism and judgment. With every passing year, many of them watch as the other people their age achieve the predictable milestones of normal life – the car, the family, the house, the nest egg. Why? Because musicians and singers are willing to give their entire lives to a moment – to that melody, that lyric, that chord, or that interpretation that will stir the audience’s soul. Singers and Musicians are beings who have tasted life’s nectar in that crystal moment when they poured out their creative spirit and touched another’s heart. In that instant, they were as close to magic, God, and perfection as anyone could ever be. And in their own hearts, they know that to dedicate oneself to that moment is worth a thousand lifetimes. – David Ackert, LA Times.

The fact that I’m in the middle of a crazy audition season may be fueling my love for the quote above. Producers and competitions come from all over the world to hear singers in New York City, but not as many of them come to Boston. For that reason, I am making quite a few trips to Manhattan this month.

Since I have my church gigs on Sunday night, I’ll have to come back to Boston then even though I have Monday off. My plans for the holiday include watching the inauguration, reading and writing a little, going to yoga, and preparing my taxes! Woo-hoo! One thing the writer from the LA Times didn’t mention in the litany of freelancers woes is that our taxes are hella complicated. It usually takes me about six hours just to get everything ready for the tax preparer.

Last night was the State of the Commonwealth speech, which I wasn’t able to watch. This was a great disappointment, since I love to parse speeches and debates. The headline is the Massachusetts Governor hopes to lower the sales tax to 4.5% and put that all toward education and transportation, while raising the income tax by 1 percentage point.

Funny thing about Massachusetts. People hear announcements like that and think “Taxes…those pay for things…I get it”. And then we pay our taxes and move on. Though we haven’t earned the moniker Taxachussetts (other states tax far higher), in general we have a pretty easygoing attitude toward taxation (exempting the Boston Tea Party, of course).

The downside of living in my beloved New England: IT IS WINTER. Even though I tend to get the gloomies worse during the fall, January has an exhaustion and anxiety all its own. This week I was fatigued for no reason, easier to irritate than usual, and eager to be anywhere other than where I am. If you’d like to offer me tickets to someplace warm, I can let you know where to send them.

Look whose face was smiling at me on the cover of Pastoral Music this month! I need to bite the bullet and get a Good Pope John poster. 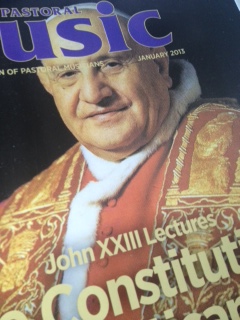 It’s now Ordinary Time, and I lament as always that I don’t have as many Green Time outfits as I have Lent/Advent duds. Since I’m planning music for liturgies, my brain is already part way into Lent. Have any favorite Lenten songs you’d like to advocate for?

Have a great long weekend!