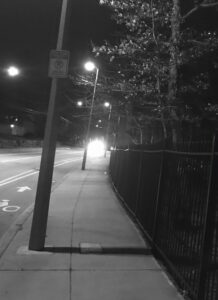 Memory holds on to such funny little details: the hat I lost at a bar on Arlington St. The ride down the grad-school elevator on Friday afternoons to meet friends. The fancy piano at the fancy lounge on which one friend played “Ain’t Misbehavin'” until a manager asked him to stop (apparently we were misbehavin’).

When I flash back to those Friday nights in my early 20s I see the streets, lit up, filling up and then emptying out as the night got later. We’d visit a spot and then get the itch to move on down the lamplit street to see what the next held.

Underneath it all was a youthful searching – wherever was next would have a new conversation partner, a new flirtation partner, a new opportunity, the hat I’d lost. I was so restless, a little bit empty, and believed that something that could fill me was “out there” under the street lights or around the next city corner. When I look back now what strikes me isn’t anything I found out there but the friends who were beside me the whole time, and what I learned about my capacity for friendship and devotion through those years of wild nights.

Just a few evenings ago I had an unusually late night out. A ride dropped the last of us off between our homes, each having to walk a few blocks back.

It was a beautiful June night – actually a June morning by my watch. The breeze was on the edge of warm and cool and the streetlights lit up the city neighborhood that has become my home in recent years. I felt out of place – or maybe out of time – I’ve never had a late, post-bar, post-friend walk home around these particular streets, to my grown-up home.

I used to think that going home was the end of something, but now it’s just another side of my life, filled with stability and love. I don’t need to wander streets to find myself anymore, but the dappled dark lights up a corner of my past that matters to me now for reasons I never predicted. Maybe this is finding myself, after all.