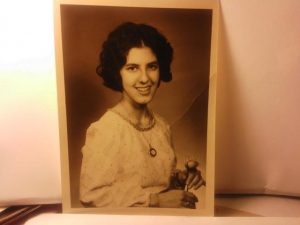 My father had an Aunt Lucy who I, of course, also considered my aunt, and who died too young of cancer. Her wake and funeral were full of Italian family and friends, many of whom were women of a similar age to Aunt Lucy.

At one point during the wake a few of her friends introduced themselves to me, making small talk about my life in Boston and frequently adding warm interjections about how lovely I was. I was in my early twenties and as insecure about my appearance as I had ever been, so their words surprised me. I smiled and hugged them and thanked them. It occurred to me afterward that of course these women would think I was beautiful. I looked just like Lucy. I looked just like them. 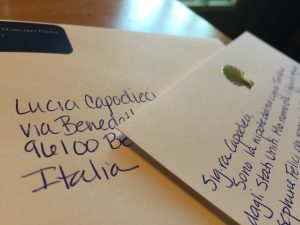 Before visiting Sicily last summer I called Lucy’s brother, Uncle Sal, to see what he knew about any relatives we had in “the old country”. He gave me the last address he had for one of “the cousins”, Lucia, in an unremarkable town outside of Siracusa named Belvedere. Giving me more family info, Sal mentioned another ancestor, who I think would be my great-great-grandmother, who was also named Lucia.

Santa Lucia, of course, is the patron saint of Siracusa.

After writing a few nervous drafts I wrote out a note in Italian to Lucia. I said that we were related, that I was planning to visit Siracusa, and that I would love to meet. I included contact info and waited, but received no response.

As soon as my husband and I set foot in Siracusa we were in love. Most of the city is utilitarian, no frills, but there are pockets of historical and religious sites, especially on the island of Ortigia, which is now connected to Siracusa by two bridges.

Just over the bridges there is an open air market every morning, full of vegetables, fish, meat, nuts, pasta and cheeses. At the far end of the island is a fortress. The first day there we walked along the water to the fortress and cut back through the center of the island down winding narrow streets. The sun was blocked by grey-stoned buildings with storefronts at street level and residences above. We saw a large cross street ahead on one long stone-paved road, and quickened our step to see what was around the corner.

There was a wide path of magnificent peach stone lit bright by the sun. It matched the color of the large structure that ran next to the street, and led to a grand piazza, onto which faced the front of that structure: the Duomo.

This Duomo was built on a 5th-century Greek temple and has been destroyed and rebuilt so many times it is like an historical layer cake. Turn one way and see Doric columns, another and see Norman sculpture, another and see baroque paintings. All of time seems contained in one structure.

The relics of Santa Lucia are in the Duomo, rather than in Santa Lucia alla Badia. This church also sits on the piazza, perpendicular to the Duomo. What it lacks in relics it makes up for with a renowned Caravaggio of The Burial of St Lucy. We wandered between the two, and I though how much I would like to come some year in mid-December, for the feast of St Lucy, our patron. 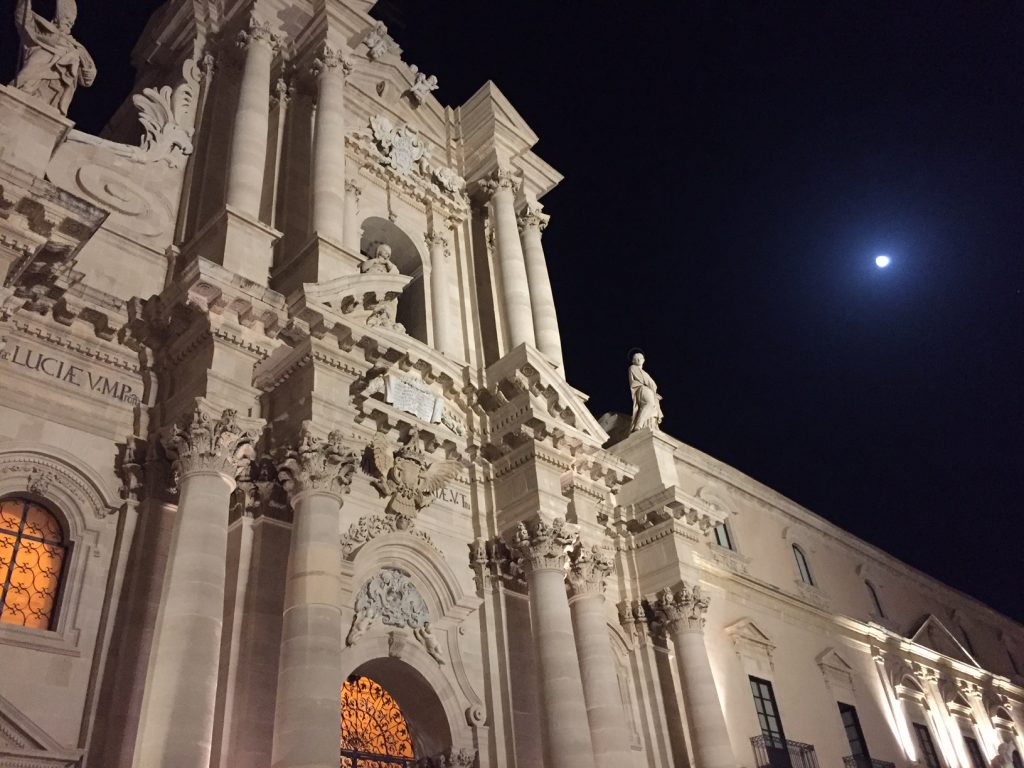 One of three days we were in Siracusa was a Sunday, so we went back to the Duomo for mass. We thought about attempting a visit to Belvedere, signs for which we had seen on the ride into town, but the bus schedule was sparse on Sundays and there were other things we wanted to see. Besides, we already knew we would be back.

We go on pilgrimages not knowing what we will find, but pursuing a heart-opening and a greater insight not the heart of God. I did not go to Siracusa expecting to find my family, but I may have gone expecting to meet them.

When I say meet, I don’t mean exchange awkward hugs and stumble through bilingual pleasantries, though that would have been fine. I met my family in Siracusa by going back in time and showing them who I am. My people left the places I stood for reasons I may never understand, and I went back, bearing witness to their sacrifice by being someone I couldn’t have been without them. I was happy, healthy, confident and self-sufficient, but that’s not what any of them would have needed to meet. I was simply there, a particular human they had loved into being beyond their imaginations.

Saint Lucy, pray for us, though you already have prayed for and blessed your sister, your niece, your cousin, your friend.