I get awfully emotionally seeing the people I love receive the Eucharist.

When I was quite ill with Crohn’s, before surgery put me into remission, I was often unable to stand through mass. I would hoist myself out of the pew with my parents or brother or now-husband, and would weep at the sight of them bowing and receiving. I surprised myself.

Tears were already flowing during communion at the recent funeral of a friend. JoJo had been first my musical mentor, then my friend and colleague in music ministry. His funeral was packed with hundreds of people who loved him as much as I did, and many of us knew and loved each other. I felt the familiar stirring in my heart as the communion procession went on, as we all sang loudly the words we have written on our hearts: Give me nothing more than your love and grace, these alone, O God, are enough for me.

We pray such things not because we always believe them, but because we hope to be drawn closer to belief, the same way we were all drawn toward the bread and wine as we said goodbye to a friend.

JoJo had been sick once before, just after I first met him. I auditioned for the collegiate vocal group he directed just before he was diagnosed with cancer. He wrote us long emails about his extensive and debilitating treatment, full of poetry and optimism. I still marvel at the beauty he drew out of suffering. I wonder, now, if that’s how I learned how to write about pain.

A published tribute reminded me of a fundraiser that was held for him at the church on campus during that time. Our ensemble was one of many that sang. The church was packed, and group after group performed, singing out their love and support.

If you had asked me, I wouldn’t have remembered it being a fundraiser. What I remember is how powerful it was, and how quiet I was (which is remarkable, as I tend to comment on everything). I felt small in the best possible way: one of hundreds who wanted to support this man. What I remember is the extraordinary love in that room.

When I was reminded of that afternoon that passed half my life ago, I realized a shadow of that memory is what I have been chasing all my life: community, support, friendship, love. Most of my decisions have been made to deepen my roots, to connect.

(JoJo’s magnetism came from gentleness, warmth and generosity of spirit. I have not been blessed with such gifts, so for me the work has always come first, singing and praying alongside people and hoping to draw people in with my devotion. After many years of hearing “I really didn’t like you at first, but after a while you won me over,” I figured out that the way into community would simply be to stay put and wait it out.)

Not long after he went into remission JoJo took each of his singers out for a meal, a chance to connect to the individual undergraduates that made up our small group. We went to breakfast. He asked how my year had been. Feeling burned by a few incidents that had reminded me I was a little fish in a big pond, I said “You know, I prayed earlier this year that God would teach me humility, and now I wish I hadn’t.”

It was a melodramatic way of expressing a self-centered truth, but you wouldn’t have known it by how JoJo responded, which was to treat it like the most normal thing I could have said. Of course I was talking about my prayer life. Of course I was emotionally raw. He had a front row seat for the awkwardness of my late adolescence and he didn’t flinch. It was the best gift he could have given me.

A good friend of mine, who sang in the same ensemble that brought JoJo into my life, was married a few weeks ago. I sang the mass, which included The Servant Song. When I sang We are pilgrims on the journey, we are travellers on the road. We are here to help each other walk the mile and bear the load, I teared up.

What unbelievable grace to have friends with whom I share my pilgrimage, who speak this language of faith and are committed to the same goals as I hope to be. That weekend I took photos to send to JoJo, which I had promised in my final email to him. I forgot to send them when I first got home, and then he went into ICU and I didn’t want to bother him until he was better.

We sang that song at the funeral, too.

Ten years ago JoJo and I became colleagues, as I joined the music ministry team at my alma mater. Our office was given the responsibility of organizing and providing much of the music for the vigil of his funeral.

I got there early to set up microphones and the front of the church was nearly bare, save the guitar stand and the piano. In one of many spaces where we had prayed and made music in the time we’d known each other, the only thing there was a space he would have filled. I shook and swallowed and got to work. 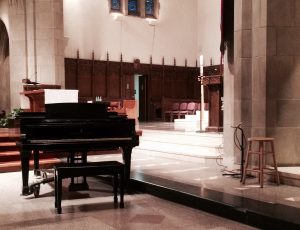 The sanctuary at the vigil was not empty for long. For the night before his funeral his family planned a musical celebration, including his own compositions and other sung prayers. Dozens of our former students came back, and one of my tasks was to find the ones who arrived late and urge them to come sing with us.

(Not blessed with JoJo’s welcoming nature, I welcome people by yanking them up on the altar. It does the trick.)

With students and alums crammed together in the choir’s traditional place, the pews filled with family and friends. Many of these were the same people with whom I had sung 18 years prior at the previous celebration in his honor, in this same space. My heart nearly burst with love for these friends who have made my second family all these years.

I say that I have chased such community for most of my life, but in truth it has also chased me, by some good fortune I could never deserve.

Truly, these days since his death, JoJo has continued to teach me, though it is a lesson I long to not have learned so soon: the things that outlast us are the same things that give our lives richness.

As we sang through the vigil, the assembly grew louder. By the closing song they were singing full strength. We will run and not grow weary, for our God will be our strength, and we will fly like the eagle, we will rise again.

There is so much I waste my energy on pursuing: recognition, comfort, security, power. None of those things matter. The only thing worth chasing is love. I was reminded this week of how much of that love I have found. I am part of a community that sings unselfconsciously every prayer that fills our complicated hearts. JoJo helped me seek that, and he helped me find it. May we all have such a legacy.

To say rest in peace seems superfluous, as I am totally confident he is now enfolded in the peace he gave all of us.