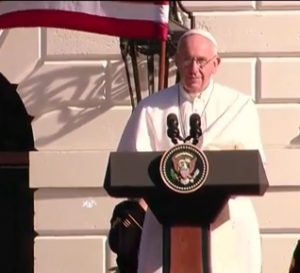 As the Pope makes his way up the East Coast this week, journalists and pundits are eager to slide his remarks into the American political mold. This is to be expected, but let’s not pretend that the Pontiff is doing this himself.

On the plane from Cuba to the US he fielded questions about being a leftist, a Marxist, an anti-Pope, and a non-Catholic. His response to one of those charges is illustrative: “I’m ready to recite the Creed if need be.”

The Pope is preaching the Gospel, and contextualizing it. He is bringing the Good News to the modern world and to our particular context. I wish this were what “politics” meant in the world today, but I’m afraid it isn’t.

At its best, our political system is the way we express our moral beliefs. So it’s not inappropriate for the Pope to talk about issues that we have relegated to politics. Lived theology can’t be set aside for policy considerations; it must inform policy at a fundamental level. And this isn’t limited to Catholicism or Christianity: values shape civics for everyone.

This Pope brings a global perspective, understanding of human nature, scientific background, historical reality and theological training with him, and uses that to express the Gospel in the way we need to hear it today. He talks about immigration, religious liberty, environmental stewardship, marriage, and poverty not because he wants to take a dig at those who have fashioned themselves his opponents, but because they are all tied to the Good News that is his task to share. He recognizes those are areas of interest in our culture, and leans into them.

So if you can, try to listen for the Good News in his speeches. Don’t look for the end game, or the punch line, or the talking point – there will be plenty of people to summarize those for you after the fact. Listen for the foundation, the root of the message. If he’s “talking politics” at all, it’s only because that’s what the Gospel makes necessary.