I began the descent to San Damiano a half hour before the church and monastery were due to reopen after riposa. Knowing I would arrive before that time I eased down the hill, admiring olive trees and Umbrian vistas while trying not to think about the impending ascent after I visited the holy site. 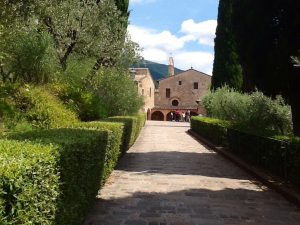 Tucked away amid groves outside Assisi’s walls, San Damiano sees fewer pilgrims and tourists than the other Franciscan sites, and the air remains peaceful and quiet. At this church Francis had the vision of Jesus speaking to him from the cross – Repair my Church, which has fallen into disrepair, Clare and Agnes shaved their heads and founded the Povere Dame. Clare died in her room at San Damiano, and it was in that monastery, several years prior, that Francis wrote the Canticle of the Creatures. 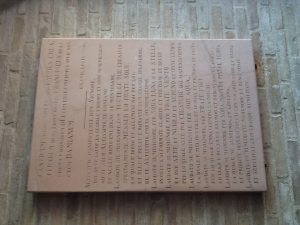 Francis is often portrayed as a proto-environmentalist and patron of vegetarians and tree huggers. I’m afraid that impression in the popular imagination comes from an overly simplistic reading of the Canticle of the Creatures, with its blessings for Brother Sun and Sister Moon. After some time spent with Francis such an evaluation rings hollow.

It wasn’t so much that Francis had a unique love for animals and nature. Rather, he had a great love for everything. That loving vision drew people to him, motivating his labor prayer and manifesting his sanctity.

What is it we want from this “faith” thing? Salvation? Moral certainty? A like-minded club? For me, those goals don’t satisfy. I long for the loving vision that Francis knew, that snaps into place from time to time, pushing me into service and wonder. Maybe it was easier to cultivate for Francis, as it was for me, beholding the green hillside where the breezes bear the smell of rosemary and of flowers I can’t name. 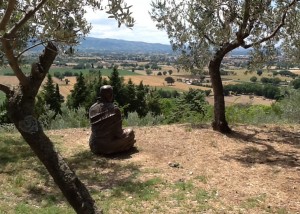