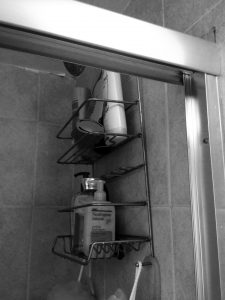 She often gave me soap, which sounds odd, but my godmother had a knack for finding gifts that I could use everyday. She was practical, providing me with lotions, mugs, reusable grocery bags, even a small countertop Christmas tree that has been my only seasonal decoration for the last decade.

This means, of course, that now that she is gone her memory sneaks up and shocks me, knocking the wind out of me and causing my eyes to burn with tears.

The soap is the most problematic, since every shower becomes a ruminative exercise at best and a weepy crisis at worst.

One bottle of “Cashmere Glow” body wash was left in the other apartment, the one I drive 160 miles to every few weeks in order to spend time with the man I love. On a weekend like most others – too short, too much driving, preparing to miss him long before I was gone, stomach pain trailing me like a nagging puppy – I squirted a handful of the smooth gel with the somewhat tawdry aroma into my hands and spread it on shoulders already drooping with sorrow.

When I put the clear bottle back on the shower rack I either used too much force or put it in the wrong place, because the entire contraption slid down the shower head, dropping half its contents on the floor of the tub.

I’m used to making messes, to my great disappointment. I’ve always wanted to be someone who could conquer her environment with neatness, who could enter a room without leaving such a wake of debris that my ultimate lack of control was revealed.

Annoyed, I pushed the rack back into place. I had to wipe my eyes before wiggling it against the wall to make sure it would hold. When I was certain that I had fixed it I gently placed all the jars and bottles back on its shelves.

I can’t fix anything.