Overhearing that on a recent day trip to Long Island prompted a few weeks of pondering money, its nature, and its effects. Stick with me to the end to find out more about the dog.

Most money is imaginary

Like many people, I log on to my online banking site and give a lot of thought to the number that pops up on the screen as my balance. Sometimes I make a few clicks and change that number by depositing in my savings account or paying a bill. None of this involves an actual object, just a set of ideas and measures that society has agreed upon.

I’m neither old-fashioned enough to keep dollars under my mattress nor to advocate a return to the gold standard, but I still get a little freaked out by this. So I try not to think about it too much. Moving on.

Additionally, that imaginary money buys them lots of real things. Of that much I am certain.

It seems to me that lots of people get up and put on suits and go into big cities and then play with numbers and they are very well-rewarded for this. By all accounts, it keeps our economy going and only occasionally creates worldwide financial catastrophes, so I suppose I’m grateful for that. And they use both sides of their brains – left for math, right for imagination.

Leaving pith aside for a moment, I know lots of lovely people who work in finance. I’m still troubled by how obnoxiously lucrative it can be for some people, because…

Money shows what what we value 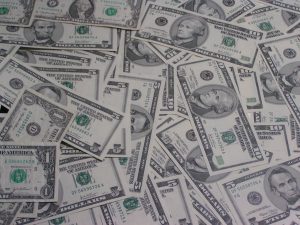 Freelancers of all stripes struggle with this reality. People are asked to sing, photograph or write for free all the time, but no one goes up to a doctor at a party and assumes that she will agree to a little pro-bono surgery. When they offer volunteer services it is seen as a laudable exception. When you’re consistently not paid, it is a sign that what you do isn’t valued, and it’s easy to read that as a sign that you don’t matter at all.  Insisting on appropriate compensation is one way of railing against our existential angst, as well as being a practical consideration.

This isn’t a rant against volunteering, or in opposition to making a conscious choice to work for free or little. It’s simply an observation about the way we show what we value.

Our attachments to wealth can get us in a lot of trouble. Families argue, partners split up, people fail to be generous or are hounded for loans. It is tempting to set one’s sights on accumulation of wealth and ignore the many other responsibilities and graces that pervade daily life.

I read an article this week about tests which indicate that many of the risky decisions that people in poverty make are caused by the stress and distraction of their financial vulnerability. That the title of the article began with “Poor people aren’t stupid” broke my heart, as it reminded me that poor people are often regarded as such.

Nowhere has the stress of impoverishment seemed more critical to me than in health care. In the two years since my Crohn’s diagnosis I have had to spend quite a bit of money on tests, appointments and medicines – and that’s with good insurance and a very mild illness. It pains me to think that there are people who can’t just pull out a credit card to pay for their MRI, or who do pull one out and then can’t pay for it.

Additionally, navigating the health care system takes lots of my time and persistence. (Remind me to tell you sometime about my last attempt to get a prescription, which took 6 weeks and involved the office doing it wrong 5 different ways.) Time and energy are luxuries, and they are not often lavished on the poor.

One who dies rich, dies disgraced

Ever since I first heard this (slightly altered) saying from Andrew Carnegie I have been crazystupidinlove with it.

Despite what we may think, money itself does not have inherent moral value. Morality comes with what we do with it. If you can give it away, you should.

I’m bourgeois enough to allow a loose understanding of what we need and what we can give away. I’m glad my parents felt they “needed” to send me to Catholic high school and to college, to give us a comfortable home, occasional vacations, and take out once in a while. But I’m also glad that they gave away food, clothes, and money. Even when I was only making a few hundred dollars a month I tried to follow in their example of generosity and I have tried to keep my giving proportional to my increases in income.

At the risk of offending, I will add that I find inheritances weird. I suppose it’s nice to get a little money when someone dies, but I have trouble imagining a situation in which someone would have earned any of that inherited money. Maybe I’d feel guilty if I had the prospect of coming into millions in a few decades.

Them that’s got shall get

If you’ve got financial advantages, it’s easier to get ahead. Period. That’s why they’re called advantages. Good schools, good meals, enriching activities – these are only some of the things that made my life easier, and that not every kid has. By my observation, one other advantage that people much wealthier than I have is access to other rich people.

The depressing flipside of this is that if you don’t have any advantages, you are really likely to be left behind. Having the misfortune of being born in the wrong city or school district, being born the “wrong” race or to parents who speak the “wrong” language, sets you up for a lifetime of working your tail off and maybe, maybe, being one of the exceptions. At that point we’ll run a public interest story about you on the news so we all can feel good.

When you have money, you make money, from what I hear. The ultra-wealthy get ultra-wealthier, and we believe the lie that there isn’t enough to go around.

Money does not make you a better person

The $15,000 dog was some special breed. In addition to being expensive to purchase, the dog was expensive to care for because, by my eavesdropping, when they’re bred that small there isn’t room for all their organs so medical care is pricey as well. (The accent with which the dog’s owner repeatedly drawled the breed name was so obnoxious that it must have caused me to block out the name.)

Sitting next to us on a coffee shop porch, two dog owners continued their conversation about how much they spent on their dogs. To my ears, the conversation was distasteful but not surprising: most of their apparel, accessories, and affect seemed designed to demonstrate that they had disposable income.

So I wondered, what’s the gain from this demonstration? In their minds or families or circles of friends, there must be a belief that a show of wealth enhances their stature or manifests their increased value. I couldn’t disagree with this more.

That said, it’s worth noting that not having money also does not make one a good person. When I got judgmental about the women with the dogs, there was no virtue in that. When a woman with multi-carat diamond earrings and head-to-toe Lululemon made a joke at the market about me buying her groceries, my instinctive anger (thankfully not displayed) was not righteous. As I continue to grow in my understanding of wealth and the world, I promise to try to keep growing in patience and love as well.