For a week or so now I have been increasingly anxious for no good reason, snapping more at the people I love, freaking out a little worse when I spill a drink or break a glass. This is the time of year when I’m not sure if I’m stressed because I’m leaving the leisure of summer, or if I’m stressed because the leisure of summer doesn’t suit my temperment (I’m one who thrives on routine). 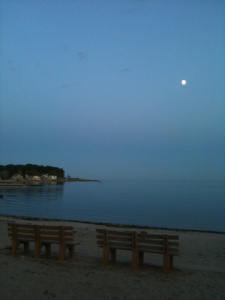 Then there is the seasonal sadness that threatens every year. Sometimes it is just a few twinges at the window when I see the sun set earlier behind trees without their leaves, sometimes it is a slow sink into the morass of a dissatisfaction that I always believe will be eternal.  While others smile with anticipation of upcoming sweatshirt weather, crisp football-filled afternoons and warming around firepits, I grasp onto the arms of my beach chair, ready to resist whatever pulls me away from the sun and into the dark, terrified at whatever the change in seasons might hold.

(Some may remember that it was this time two years ago, after my first summer with my long-distance love, when our easy summer afternoons were about to be replaced with an endless cycle of Friday evening 100+-mile drives, that I started to feel the first symptoms of Crohn’s disease. As fall went on and we began learning the true wages of a long-distance relationship, one no longer eased by vacation time, I got sicker and sicker. That was one of the easiest autumns I have had, in terms of seasonal affective disorder. I was too busy bleeding internally to muster any energy for despair.)

Because I’m terrible at enjoying the moment, all of these apprehensions have been coming out lately. Oddly, yesterday, I got some unexpected advice (“Shut up”) from an unexpected source (myself).

Over on IgnatianSpirituality.com‘s dotMagis blog, my buddies from Loyola Press posted a video I recorded for them almost a year ago, in which I read one of my older posts titled “Listening to Silence“. I can’t believe I only wrote that post a year ago; for some reason it feels like ancient history.

It reminded me of something I needed to hear right now, that God’s voice is always there, even when we’re too frazzled (or too enamored of our own tortured state) to clear away the noise that crowds it out. I know from every year that goes by, from every experience of finding peace in the hush, from every time I’ve sought and found, that pain and confusion can’t last forever, and that another heaping of grace lies around whatever corner I dare to tiptoe around in silence.