We went out for a passeggiata after our first dinner in Assisi, slowly mounting the steps of the perfectly preserved town, out bodies aching from the luggage we’d hoisted across continents for the prior 24 hours.

After descending some brick steps and approaching anew the Centro, we felt we’d earned a spot at one of the outdoor cafes for un po’ di vino after an exhausting day. We chose the cafe where the waitress seemed most sincerely friendly.

She brought us some wine, and returned to stand at a nearby table, where three staff members were keeping company a bedraggled man who one might euphemistically describe as “off”. He seemed to be a regular, fond of white wine, and an object of affection for the servers.

Eventually he decided to listen to his pocket radio, turning it up so that it conflicted with the music blaring from the cafe. A manager sat with him and shouted up numbers to a server who had gone upstairs in hopes of setting their radio to the same station as his, thereby minimizing the cacophony.

They never found the right station. Just as they were giving up a man who resembled Einstein in a tuxedo and Birkenstocks commenced flute karaoke, playing along with his boom box. Then there were three tunes, all competing for attention.

A tourist hoping for a picture of Albert the flautist gestured that he should stand under a stone archway, which added enough resonance to his sound that we had to order a second glass of wine. He launched into the Four Seasons, the Eurythmics came on the cafe sound system, and our fellow patron admitted defeat, turning off his pocket rocker.

The teens gathered on the steps of a Greek temple turned Church turned gathering place were growing louder. Friars and Poor Clares and couples eating gelato passed through the noise unfazed. We sat back into our chairs and sipped our wine. 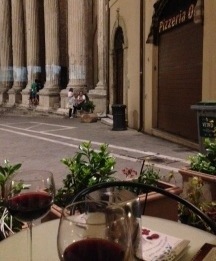