Most people feel at some point like they’re swimming upstream culturally. Often our family values, religious observance, or life experience puts us at odds with this thing called “culture”, which increasingly is synonymous with “whatever the corporate media is trying to sell us”.

As a religion teacher, church historian, and artist, I very often find myself straddling two worlds, immersed in the culture around me but prioritizing very different values. This week, as the conclave unfolded, I noticed plenty that went against the grain. Here is my summary of those counter-cultural elements.

Sorry, cult of youth, we are not getting a spry, youthful Pope. I’m not sure we should. This is a position that needs wisdom and experience. Those do not belong exclusively to septuagenarians, but they sure are easier to find among them.

Also, from a more strategic perspective, it doesn’t necessarily do the Church good to have a Pope who reigns for decades. Turnover, change, the excitement of new personalities and new ideas are all good things (no offense, John Paul II. OFFENSE, PIUS IX.).

Many of you know that I have a member of the media very dear to my heart. He was in awe this week at the secrecy maintained throughout the conclave. Our media is used to always being able to find out the details, to there always being someone willing to talk. For a few days, there were no sources. In an age of over sharing, no one was willing or able to share.

I suspect this is what lies behind the tantrums that some members of the press threw over the secrecy of the conclave (though their inability to comprehend that there was a positive, uplifting religion story occurring might have had something to with it). Which leads me to…

Those of us familiar with the Gregorian Reforms of the twelfth century (you aren’t? For shame!) know that the practice of keeping papal elections private was meant to prevent the influence of aristocrats, factions, and marauding hordes on the election of the Pope.

That didn’t stop a few, notably in the media, from asserting that the conclave was just another deep dark secret held by the sinister cardinals. Having not read any Dan Brown novels I can’t say for sure that’s one of his plots, but I can imagine.

We love transparency, and it has served us well. I have to laugh, though, at the complete inability of some to distinguish between secrecy and privacy. When trying to discern the will of God, perhaps it’s helpful to shut the world out? And if you still can’t believe that the privacy isn’t a front for political machinations and intrigue, you can read some quotes from Cardinals who insist the conclave would ‘bore you to tears’.

A different model of decision making

After the black smoke appeared the first evening of the conclave, I was pleased yet unsurprised. With no obvious choice to a question of utmost importance, such a decision that should take more than a few hours.

The AP, alas, disagreed with me, proclaiming that the cardinals had “failed” in electing a new leader. This “failure” language was standard throughout the MSM until the end of the conclave, prompting this tweet (at the time I thought the report had come from a Globe reporter, and was later corrected that it was AP) 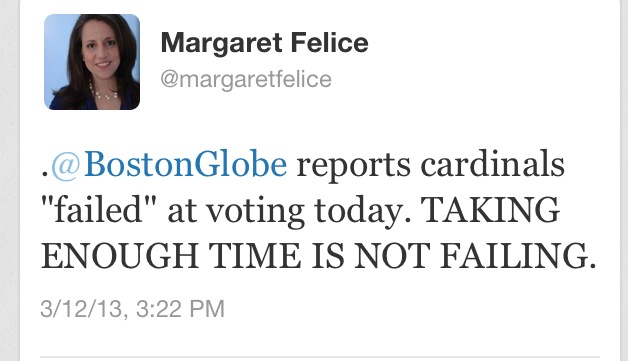 This is one situation in which the priority is NOT to come in with a preconceived idea that you will hold to at all costs, or with an established party line that makes votes a foregone conclusion. I’m lucky to have spend a lot of my life in Jesuit institutions at which discernment is valued at the personal and institutional level. That means using time, prayer, and process to make a decision. Notably, it often results in thoughtful, measured decisions. Is that what we now describe as failure?

Waiting might not be the end of the world

The decision had finally arrived, and we knew ahead of time that the Vatican press office wouldn’t be rushing to their smartphones to tweet about the smoke. Fr. Lombardi (who I totally met in Boston this summer and greeted in Italian and he was totally impressed and it was one of the best moments of life!) told reporters  he wouldn’t start the PR bombardment at that moment because he “[believed] people should be living it”.

Where was the smoke? What color was it? Is that the sound of bells? When are they coming out on the loggia to announce who it is? Aren’t we supposed to know everything RIGHT NOW?? Even though I’d been warning people that this event was going to challenge a world that was used to knowing everything immediately, after about 45 minutes I started going a little nuts myself.

In the span of church history, was this a cataclysmic wait? In the span of eternity? No. And it was an hour-plus of excitement, wonder, and prayer. It was magical.

Also magical was the moment when our new pope, Pope Francis, asked the people to pray for him. I wonder if that made the evening news? My guess is reporters are not inclined to include 15 seconds of silence in a 90 second news package. 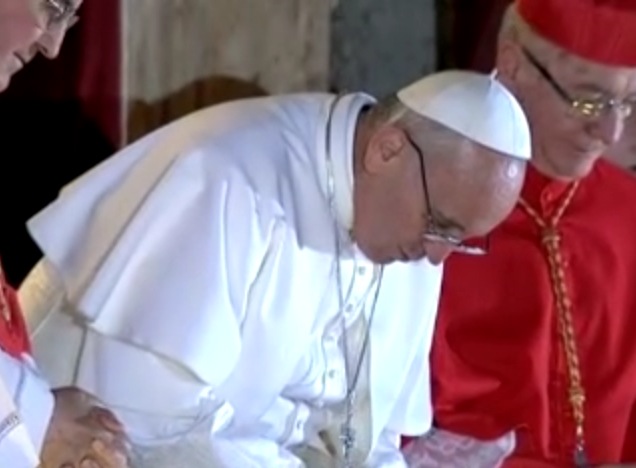 We don’t expect our leaders to shut up. We expect speeches to be geared toward impressing us and perhaps manipulating us. When the eyes of the world were upon him, the Pope stopped talking and asked us to pray. By all accounts the crowds in the Square took his cue and prayed silently. I was silent in front of the TV, and teared up at the profundity of the moment.

After the silence came the crush, as everyone rushed to describe and define the man who was once known as Jorge Mario Bergoglio. Surprising no one, the New York Times immediately declared him theologically conservative, which is their way of saying he follows the teachings of the Catholic Church.

As usual, the attempts began to fit him into the boxes of modern American politics. It has been amusing to watch everyone’s brains fall out when they observe how spectacularly his character resists such categorizations. I can hear the inner monologues: “he likes the poor….but he opposes gay marriage….hasn’t anyone told him you can’t do that?”

Everyone is suddenly an expert on Argentina’s Dirty War and on liberation theology too. My friend and former classmate Tim O’Malley put it best on the latter when he wrote:

Dear newspapers, liberation theology isn’t the rough equivalent to the Democratic Party platform. Progressive journalists interview Gustavo Gutiérrez. He will offend you, because he really believes in God’s revealed preferential option for the poor. Like the real poor, not the ones used for elections.

Right now it seems we’ve settled on the “socially liberal, morally conservative” story line, and my fear is that most newspaper readers will settle for that even as the complexities of his ways emerge on the international stage.

As I was writing I kept thinking of more elements to include (ritual and tradition being high on the list!) but I wanted to limit myself to seven. What would you include on your list? What did I leave out?