I spent most of the day scared I was going to do excitement wrong.

Life is sprinkled with unforgettable moments. We often remember exactly where we were when big news happened or was announced. Since we knew this papal announcement was coming, many of us had a choice about where we would be. This is a stressful choice.

I had to be out of work today, which complicated things. At 12:30 when we expected the first vote, I was in the grocery store. I kept checking my phone mid-aisle. This aggravated everyone at Trader Joe’s.

After days of singing the praises of the counter-cultural practice of having to wait, I began the process of losing my mind with anticipation. After an hour I was tired of waiting. I was also tired of worrying about what would be the exact right way to react, about to how many people I could break the news, about what would be just the right tweet or Facebook status.

A shadow appeared in the window, the crowds on TV started screaming even louder, and I teared up at the beauty and excitement of it all. When the announcement came, it was a name with which I only had a passing familiarity: Bergoglio. 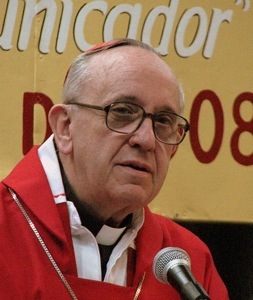 I was soon to learn that he would be the first Jesuit Pope. My pride at being part of the group on whom the attention of the world was fixed then became compounded: my entire adult life has been spent working with and for Jesuit institutions (I’ve been called “basically a female Jesuit” more than once).

Bergoglio’s Urbi et Orbi blessing was delivered in Italian slow enough that I could understand it, and I tried to block the translator’s drone on TV. As he began the Our Father the translator stopped and the world listened to Pope Francis I and the crowds pray. We went on to pray the Hail Mary and the Glory Be.

When he asked the people to pray for him before he blessed them, my breath caught in my chest. He bowed, and there was silence. In a world of non-stop stimulation and activity the stillness was magical. I could be still myself, and pray, and not worry about what to tweet or who I had to impress.

If you’ll excuse me, I have some research to do. There are a lot of people who will expect me to be an expert on our new pope in the next few hours, and I don’t want to let them down.

I hope you’ll excuse me taking a break from my series on Dead Man Walking to report on such important news!