In the wonderful world of the Catholic liturgical calendar, this past weekend was a big one: Immaculate Conception on Saturday, with observance of the Second Sunday of Advent beginning at sundown. Since Immaculate Conception is a day of obligation, Catholics were obliged to attend mass in the morning. In casual parlance, Saturday night wouldn’t “count” toward your obligation.

Predictably, blogs and social media blew up with commentators resenting use of the word “obligation”, suggesting we call it a Holy Day of Opportunity or something like that. Two points: 1. That’s not what it’s called. 2. It was an obligation.

I had two plans in place for Saturday morning, and it all depended on where I got a parking spot the night before. If I had to move my car in the morning, I would go to 8 am mass at my parish before heading downtown for a morning concert. If I found a parking spot where I could leave the car, I would take the bus downtown early, go to 9 am mass at the chapel in the mall, and still make my 10 am call time.

By some miracle I got back from my show at 11 pm Friday and still found a decent parking spot. I mentally prepared myself for an early morning ride on the city bus while I wound down from my performance and hit the sack. My alarm went off too-few hours later. I shuffled out of bed to the coffee pot and spied drizzle through one of my garden-level apartment’s few windows. My master plan had not involved rain.

Still I curled my hair for my show and packed a bag of concert blacks and put on boots and shuffled over to the bus stop. I waited in the rain. I boarded. Still groggy, I observed my fellow travelers: a woman with a lip ring trying to put on lip gloss. A man who paid the fare of a non-native speaker who didn’t understand the rates had changed. A man who was whistling.

As the bus emptied out the whistling continued, going from “pleasant display of whimsy” to “sound boring a hole in my head” around the time we crossed from South End into Back Bay.  The bus was behind schedule and I knew I was going to be late for mass, so when it stopped I darted out in the rain and into the nearest entrance, on the other side of the mall from the chapel.

It was 9 am on the dot, and my “Holy Day of Opportunity” was giving me the opportunity to run through the mall carrying two bags, sweating my way through a concourse so empty and resonant that the whistling was still following me as the distance between us increased. I made it to the chapel during the recitation of the Gloria.

My fellow worshipers seemed to have one of my least favorite Catholic habits: sitting on the very end of an empty pew, and exhibiting body language that reads “I will make you climb over me”. Seriously, are there so many people at mass now that every needs to worry about being the first one out in a fire?  So the ends of all the pews were plugged up and I stood in the back. I was still sweating and had no where to put my coat. I had put my two big bags down and wasn’t comfortable draping my coat over them to create a huge mound of my belongings.

The homily was fine, which I expect from the good men who serve at this chapel. During the collection I bent over to find some money to offer, and got the tassel of my scarf caught in my bag’s zipper. I thought “is this really how I’m going to go? Strangled by my scarf during the preparation of the gifts?” I freed myself in time to hand over a few dollars to the collector, who looked like Kramer with a full gray mane and who maneuvered the basket with the elegance of a dancer.

At the sign of peace I was able to see the faces of the other folks who came to early mass in the rain. It was comforting. I was last in line for communion, toting all my bags, because no matter how great the other people at mass are, you don’t leave your stuff unattended on the floor of a chapel. 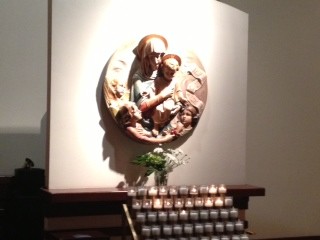 This was not an experience of extraordinary grace, prevenient or otherwise. It was an obligation that I met because it is what I have agreed to do. I have given my life to the practices and commitments of the Church, so I do what is asked of me even when I am busy or don’t feel like getting out of bed.

After mass I stayed for presentation and sang along with O Salutaris Hostia, which I have never quite learned. I walked through the mall to the exit closest to the concert hall, and watched a man take his toddler up and down the escalator a few times to satisfy her thirst for adventure before I opened my umbrella and headed back out in the rain.

When you have done all you have been commanded,
say, ‘We are unprofitable servants;
we have done what we were obliged to do.’ (Luke 17: 10)