I have a very vivid memory from childhood of my father telling me that people should be able to keep what happens in the voting booth private. He defended it with a vehemence usually reserved for the seal of the confessional.

My mother, too, while deeply religious, approached voting with devotional fervor. It was a celebration, no matter how insignificant the election, and she showed me how to take delight in the rituals: stepping behind a pale green curtain, making selections, pulling the lever, and claiming your “I voted” sticker.

Just as the pews are packed on Christmas and Easter, every four years we see far bigger crowds than we do for a city council primary.

Voting is an outward sign of an often obscured belief that everyone should have a say. It’s fairly miraculous, not only that the writers of the Constitution put this system in place, but that it has continued to evolve, including more and more people as our understanding of “All men are created equal” has expanded. When you think of the culturally-enshrined discrimination, racism, and patriarchy that was accepted uncritically for thousands of years, we’re not doing too bad. There’s a long way to go toward everyone truly having a voice, but we shouldn’t ignore that the levels of inclusion we have achieved are truly miraculous.

And when we vote, it’s not just about us anymore. It reveals to us in starkest terms the paradox of our significance: our individual votes don’t seem to matter, but when combined with force of the rest of our community they are the only thing that matters. Even among those who disagree, “I” disappears into “we”.

We are weary of politics and spin and negativity. It’s easy to see corruption and machinations around every corner. I hope that someday we can look back at this time and see that even though it wasn’t perfect, there was still something about it that was inspiring and good. 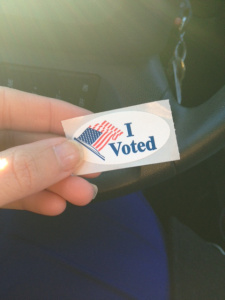