This just in! I’m a woman voter.

Apparently this says something about me, and politicians believe they can use this information to appeal to me.The first thing it says about me is that I like pretty pink fonts. Who knew? 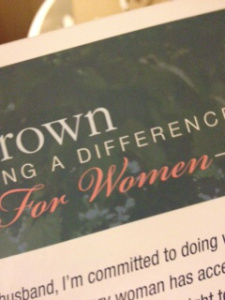 Scott Brown says I should like him because he has daughters and is nice. Elizabeth Warren and Barack Obama say I should like them because abortions. I also heard a rumor that Mitt Romney tried to woo me by not yelling at the President Monday night about Libya.

So what’s a lady voter to do?

Women disagree on things! (And for what it’s worth, so do men, and Catholics, and secular voters, and white voters, and black voters, and on and on). If I felt it would do any good, I would offer this advice: stop pandering to different groups, be a person of principle and integrity who’s not beholden to any partisan litmus test, and show me you can lead.

Since we’re talking politics, I’m sure there’s someone who disagrees with me (woman or man) so tell me why in the comments.