I left Boston yesterday afternoon for a place where there is significantly more grass, trees, and other flora. While running this morning I was admiring the many colors when, in the distance, I saw a patch of grass with lots of purple speckled with large yellow dots. Even though I knew they were dandelions, common weeds, in that moment those yellow dots were the most beautiful thing I had ever seen.

Some of my fellow metaphorically-minded religious folks would see in that proof that Satan is a beguiler, that the things that ultimately consume us are hidden in lovely packages. I, on the other hand, began an extended meditation on how even the weeds, the least among flowers, are beautiful and valuable. Quite a difference.

I’m not usually one to say things like “there are two kinds of people in the world”, but when it comes to people of faith, it seems to be true: some people see the world as something to be defended against, and some see it as something to be embraced. Although I fall immovably into the latter group, I try as hard as I can to be charitable with those who disagree with me, because I really think this attitude has everything to do with personality and very little to do with conscious choice.

This approach to the world is about much more than interpreting dandelions, I have found. Through times of trial and pain I have discovered that my inclination is not to dwell on the evil that prompted the agony – though true evil it may be – but to look for hope amid the wreckage, to figure out what is still salvageable, to look for the evidence of God still working.

Maybe it’s my confidence in God’s ongoing work that keeps me from being numbered among the “prophets of doom”. Anyone who knows me will tell you that it is not because I have a naturally cheerful personality. And it’s not because I am a better person than someone who meditates on all the problems in the world that need to be fixed. I understand that it takes all sorts of people to make up the Body of Christ, and that without their unique contributions and charisms we would be incomplete.

I may never know why I insist on finding beauty in the weeds, but I am grateful that I do. 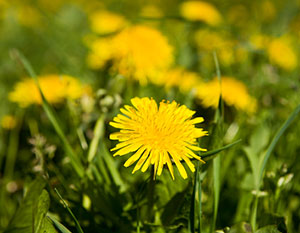 In the daily exercise of Our pastoral office, it sometimes happens that We hear certain opinions which disturb Us—opinions expressed by people who, though fired with a commendable zeal for religion, are lacking in sufficient prudence and judgment in their evaluation of events. They can see nothing but calamity and disaster in the present state of the world. They say over and over that this modern age of ours, in comparison with past ages, is definitely deteriorating. One would think from their attitude that history, that great teacher of life, had taught them nothing. They seem to imagine that in the days of the earlier councils everything was as it should be so far as doctrine and morality and the Church’s rightful liberty were concerned.

We feel that We must disagree with these prophets of doom, who are always forecasting worse disasters, as though the end of the world were at hand.

Present indications are that the human family is on the threshold of a new era. We must recognize here the hand of God, who, as the years roll by, is ever directing men’s efforts, whether they realize it or not, towards the fulfillment of the inscrutable designs of His providence, wisely arranging everything, even adverse human fortune, for the Church’s good. – Pope John XXIII, Address at the Opening of the Second Vatican Council