One of the significant downsides to “doing” theology professionally is having to follow religion news. I am expected to know about anything in modern culture that even remotely has to do with religion. That is why I had to swallow my disgust and pick up the rag that was once a newsmagazine called “Newsweek” last weekend and read Andrew Sullivan’s “Christianity in Crisis” which the editors conveniently tagged “Forget the Church: Follow Jesus” for the cover. 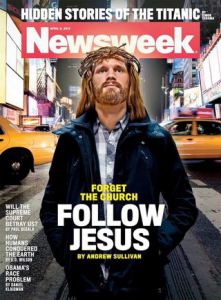 Like most of Sullivan’s writing, this had convincing arguments and was a very easy read. I have two major criticisms: his use of hyperbole damages his credibility and he assumes that “the Church”=”the hierarchy” or “the politicians”.

But let’s not get ahead of ourselves. Before I even read the article I looked at Tina Brown’s editorial introduction. She unsubtly includes a picture of Roman Catholic cardinals just a few lines away from the sentence “Today, not many of the fools telling us how to live are holy.” Thank heavens we now have Tina Brown serving as our moral compass and arbiter of holiness. It’s a marvel virtue lasted all this time without her.

Back to Sullivan. I would summarize his main thesis as one that I entirely agree with: the public/political face of Christianity has drifted from the message of Jesus, and many people who describe themselves as Christians don’t act in a very Christian way. Unfortunately, this thesis is buried in loads of unsubstantiated assertions about “the state of Christianity today” that lumps together all of the different Christian groups into one hateful monolith.  This sentence in particular raised my hackles:

in the last decade, whatever shred of [the Roman Catholic bishops’] moral authority that remained has evaporated. The hierarchy was exposed as enabling, and then covering up, an international conspiracy to abuse and rape countless youths and children.

Sullivan writes at length about Thomas Jefferson’s youthful endeavor of razoring out everything in the Bible except the words of Jesus. By all means, listen to Robert Barron’s full response to that here. Barron and I agree that it is silly to cut out everything but Jesus’ words when Jesus did so much doing. What he did was as important as what he said.

Both Sullivan and Brown insist that Jesus was entirely apolitical, and that his “final apolitical act” was to refuse to defend himself at his trial. Perhaps they are superior exegetes than I am, but I never once assumed that Jesus lack of defense was because of a moral opposition to the legal system. More importantly, Jesus says plenty in his trial, including this:

There are many people in the public sphere who profess their faith and believe they are doing just what Jesus did: testifying to the truth. I believe that Sullivan intends to criticize those who use religious language to satisfy their own will to power, but again he lumps together anyone who believes that faith and morals should influence policy and damages his own argument.

One really eloquent and truthful passage comes at the conclusion of his essay:

I have no concrete idea how Christianity will wrestle free of its current crisis, of its distractions and temptations, and above all its enmeshment with the things of this world. But I do know it won’t happen by even more furious denunciations of others, by focusing on politics rather than prayer, by concerning ourselves with the sex lives and heretical thoughts of others rather than with the constant struggle to liberate ourselves from what keeps us from God.

The problem is he doesn’t identify the many people who proudly bear the name “Christian” who are already doing the right things, which is to say, most of us.

And that was my criticism and frustration on Good Friday, when after venerating the cross and receiving communion the assembly sang “Jesus Remember Me”. I looked out across the pews of the parish I grew up in and saw so many tired, holy faces. Old faces that had seen it all. Young faces full of hope and energy. Devoted faces all, with their mouths moving together singing “Jesus Remember Me when you come into your kingdom”. We all had come together in the church because we saw value in each other, in the companionship we share and in the leadership we get from our flawed, human leaders.

Quite unexpectedly, with the sort of inspiration that often comes in times of prayer, I thought the following: Screw you, Newsweek. I’m not forgetting the Church. I love it. We love each other,which in the long run, is harder than any new-age individualism.