The recent Occupy Wall Street movement has caused my natural cynicism and my natural populism to collide in a most confusing way. On the one hand I love anything that involves sticking in to the plutocracy, but on the other hand I wonder who is paying for the data plans that are allowing the youth of America to tweet the revolution.

Part of their shtick is that the are leaderless and, for all intents and purposes, platformless. Nice idea, but it keeps there from being any real outcome that they are looking for (say, for example, a tax code that allows every business to get a fair shake, not one that allows only those who can afford fancy accountants to find the loopholes). I’ve been following the story with some interest, and have thought about somethings that they might be trying to say, even though they are not saying much at all.

Maybe they are saying that they are on to the game of the elite, the one where they tell the middle class that it’s *actually* the poor people who are taking their money, with their emergency room trips and public defenders and undocumented 5-year-olds going to public kindergarten. Maybe they are catching on that if anyone is keeping the middle class down, it’s the big banks and all those corporations that get pay themselves unconscionable amounts for pushing imaginary money around. Maybe they understand that we are all safer in an environment where everyone is treated well, not just those who are the same color as us or who speak the same as we do or who “worked hard enough”. Maybe they understand that while hard work takes a lot of us very far, there are still some people – classes, even – who can work hard their whole lives and never have access to a good and safe education, never have adequate representation in the government, and never feel like they have a true financial or social safety net.

Maybe they are saying that they are over the idea that anything that makes money is automatically good. Maybe they got so tired of trying to fight the culture of the bottom line that they had to get together with others to fend off the exhaustion of fighting the almighty dollar.  Maybe they got tired of the farce of the American Dream, which mainly involves buying all the right things, that is dangled in front of us by sales people in all industries.

Now before you get all “if you don’t like it here why don’t you get out of our country”, let me be clear: I love America, and I’m not going anywhere. There is no place better in the world to live. Our bottom 99% still lives safer and more comfortable lives than most of the world. We have citizens who want to help, who want to be good to each other, who are moral and generous. We have arts and culture and industry. We have safety. I love this country. I love my home. 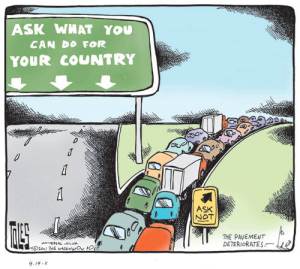 We have some of the most amazing ideals in history. Our national heroes said things like “Ask what you can do for your country”, “I cannot tell a lie”, “Every man must decide whether he will walk in the light of creative altruism or in the darkness of destructive selfishness”. Most of our nation wants to live like that.  I’m ready for our country to start living up to those ideals, instead of making selfishness the goal and altruism seem like softness. Altruism takes strength, more strength than the crafty maneuvering that keeps the powerful empowered. I’m ready for more than big business’ status quo. Maybe the protesters are too.