The sun was going down when I left the practice room two nights ago. Despite fatigue and hunger I had plugged away for over an hour, not just because I have music to learn for an upcoming recital but because I was really enjoying singing and I wanted to keep doing it. I sang through recital songs, audition arias and my Easter solos before caving to the hunger that was perfectly reasonable considering lunch had been over eight hours prior.

As I pulled off the Pike and dusk was settling in I caught out of the corner of my eye one of the promotional signs that tends to pop up in Boston before Patriots Day. From New Balance’s “Excellent” ad campaign, it read “Excellent Trained Through The Winter”. 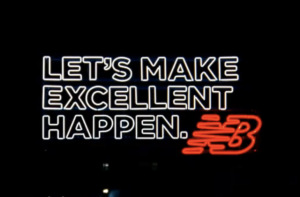 I had a pretty good winter, trainingwise. During the first few warm weekends of the early spring I was finally joined on the water by other runners, and was glad I had trained through the winter, on treadmills and snowy streets and windy causeways. There’s nothing worse than those first few weeks back at it, when you’re convinced this may be the time your body has permanently forgotten how to run. Miraculously, I managed to take almost a minute off of my mile since the leaves fell from the trees.

What else did I do this winter? Learned three roles and an hour of recital music, shaped curriculum, wrote blog posts ad nauseum, carved out time for prayer, sent friends and family letters in the mail, all in pursuit of excellence. I trained through the winter.

Nothing I’ve ever pursued – not even excellence – has the power to satisfy me. My satisfaction lies in that fruitful tension between opposing poles. In faith it’s the balance of already and not yet, in singing between chiaro and scuro, in running between exertion and recovery. Pushing too hard in one direction for another gets me further from my goal.

Some days I have to scrap the trip to the practice room, or sleep in instead of getting up to run. I don’t need an ad to remind me to work hard – I will do that on my own. The billboard that I need to see is the one that reminds me that sometimes excellent doesn’t come from racing but from stopping.