I told them I was going for a run, but that wasn’t the whole story. 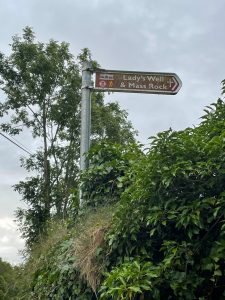 When driving to our accommodations in west Cork, I spied from the passenger seat a sign marking a “Lady’s Well and Mass Rock” and pointing up a country path. Chasing down old places of prayer is right in my wheelhouse, so the next morning when one was already out walking and two were still dozing, I went off “on a run” with the intention of following those signs after I’d covered a few miles.

In this part of the country there are hiking trails intersecting the roads every few steps; and jogging down the first hill I found a different sign indicating a trail to the Lady’s Well. This look liked paved road, so I abandoned the idea of running in a straight line and started my pursuit earlier than expected.

The sign sent me up past houses and farms to the top of a hill with stunning views, but at the top of the road all of the available paths were people’s driveways. Next to a gate leading to a path “off-road” was a post with a yellow placard with an image of a hiker on it. I didn’t want to get my sneakers soaked for the rest of the trip but what could I do? I’d already walked up the hill, so I had to keep going.

I felt like a kid again. Growing up near woods and nature preserves, I spent plenty of time wandering through different paths trying to find whatever was around the next bend. I have some cautious tendencies, but in the woods I was fearless, constantly curious, delighted with every discovery because by the pursuit I had made it special.

By the third or fourth trail sign I passed a gate spray-painted silver with a “stairs may be slippery” sign. I unhooked the rope holding the gate closed and went down the stairs. There I found a mass rock, used during “penal times” and a small well, both surrounded by statues of Mary. Since it was down below the path it felt secluded, although Mary looked down from the path below. 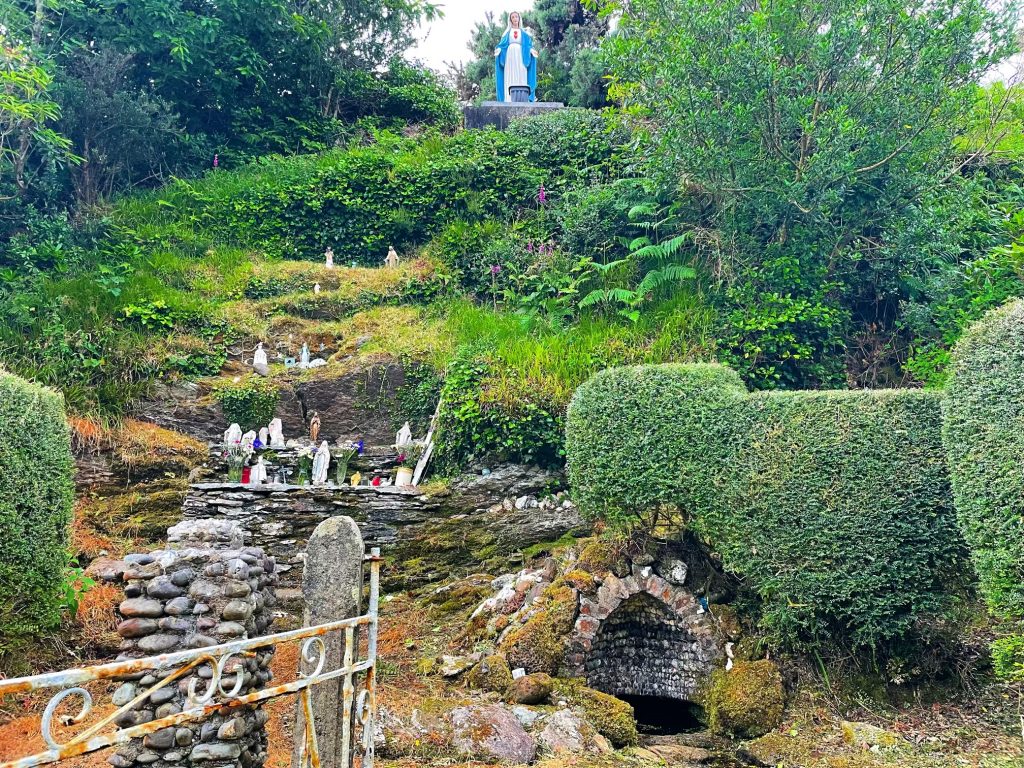 Just a place of history, just a place of prayer. Obviously maintained, so still special to someone. I snapped a few photos, blessed myself with water from the well and headed back up the stairs. 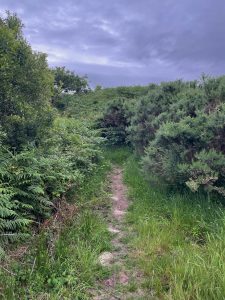 I felt brave enough to continue on the hiking loop, which took me over stiles, down narrow wooded paths and wet fields. The trail put me out on a side road. Already damp from dewy fields and brush, I jogged the rest of the way back as it started to rain.

Later that day it brightened up as we explored a neighboring village where my grandmother had lived before she emigrated to Hartford at age 14. We pulled over near a historic cemetery, and wandered looking for familiar names. There were a few, though from recent decades, and we hypothesized that it’s unlikely that 100 years ago our family could have afforded funeral plots.

At the back of Kilmacomogue cemetery is another Lady’s Well. This was less secluded and a little more genteel. My husband rested on a nearby bench while my mother, brother and I walked among the graves, and we all stood beside the well and blessed ourselves with its water before heading back to town. 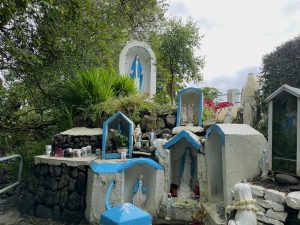 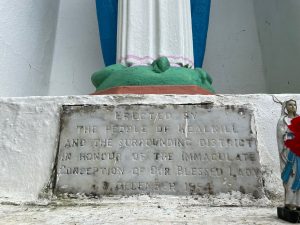