Happy Easter!! It was the Christmas season last time I found time to share some of What I’m Into, which tells you about how busy I have been. Always grateful to Leigh Kramer for the inspiration to talk about some great books, music and activities through her link-up. Here’s what I’ve been into.

Night at the Fiestas

Why don’t I read more short stories? Kirstin Valdez Quade’s set of stories, set mostly in the American southwest, were captivating, wrenching at times, and short enough that I felt like I was accomplishing something. There are strong religious themes in her fiction, which she discussed in a feature in America. (I ripped that interview out of the print edition so that I would remember her name, then left it on the side of a table for months before I remembered to request it from the library. Such is my life.)

Speaking of requests from the library, when I finally get the email that a book I was 115th in line for is available, it’s usually a surprise. I read this in one sitting on a snowy day this winter, and was drawn into the intrigue set in a perfect little suburb. Family dynamics, teenage drama, class issues and long-held secrets get masterful treatment by Celeste Ng. I have to admit, it didn’t quite live up to the hype for me. I wonder if the readers making up these “Best Books” lists all live in suburbs and secretly want to see them turned on their heads. I feel guilty admitting that I didn’t adore it, but I really, really liked it.

It’s cold and snowy in early April and I am just desperate for it to be gardening weather.

In late January I sang the role of Frasquita in Carmen with Opera New Hampshire. This performance was a collaboration with the New Hampshire Philharmonic and New Hampshire Master Chorale so there was full chorus and orchestra on stage with us, and the whole experience was a delight.

In two weeks I do a school tour of La Boheme with Piccola Opera, also in New Hampshire, singing the role of Musetta. Over the years I have done quite a bit of performing in New Hampshire (which readers from other parts of the country may not know is not even an hour from my home in Boston), and have come to love singing there. Long story short: The audiences are really nice.

We went with friends to see Waitress when it toured through Boston. I’ve been obsessed with the soundtrack for more than a year, so this was a treat (no pun intended)!

With my diabetic at a show about sugar. #Repost @rgoulston ・・・ Do I have to tip? @waitressmusical 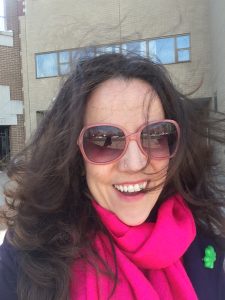 Most of the last three months were dominated by snow or Lent, or some combination of the two. I had a really hard March, which I wrote about in In Between Miracles. I came down with a pretty fierce cold which began on Laetare Sunday, but that wasn’t going to stop me from getting a blustery Laetare selfie.

In general, this has felt like the fallow season that in nature it is meant to be. (Hey, I wrote about that this winter too!) I try to be gentle with myself for not doing more, for just enduring.

How has the weather been where you are? Has it felt like something you have to endure? What have you been into?

The usual disclaimer: This post contains Amazon Affiliate links. Purchases made through these links put some change in my piggy bank, at no additional cost to you.