When the Pope Francis lovefest began early on in his papacy, I had two reactions. The first was that the little gestures that showed us his character from the outset – paying the bill at his hotel after the conclave, for example – seemed so easy and obvious after he’d done them. Why don’t leaders do these things all the time?

The second thought betrays my natural Irish fatalism. Though I fell in love with Francis along with everyone else, I couldn’t help but begin waiting the other shoe to drop. They’re going to turn on him (whoever “they” are). The next Pope won’t be so beloved. The pendulum will swing back. This is all too good to be true. We will get into trouble casting so much attention onto one person. 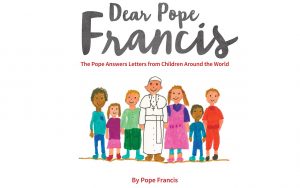 I stand by the idea that excessive focus on the Pope – any Pope – can be dangerous, but after reading the latest from Francis (via Loyola Press), I think I’m finally ready to surrender to the joy that that Pope Francis shares. In Dear Pope Francis: The Pope Answers Letters from Children Around the World

, Francis answers questions from children around the world, tackling personal questions such as “do you like to dance? Why do you like soccer?”, alongside theological questions about such heady topics as miracles, the afterlife, and violence.

Francis accomplishes quite the feat by being selfless and deflecting attention in a book that has his name in the title. The intro to the book reads “Thank you for sending me your letters. It brings me joy to read them all.” Each letter is reprinted with the child’s own handwriting and drawing, alongside a picture and translation of the question into English. The wonderful diversity of our Church is displayed on every page. We learn as much about the Church and its young people as we do about the Pope.

Antonio Spadaro S.J., who transcribed the Pope’s answers, mentions that Francis said “But these are tough questions!” when he first read them. One child asks what God did before the the world was made. Francis answers this and similar questions with appropriate simplicity, but does so in a way that leaves open the possibility of further complexity when the time comes, rather than freezing his answers in an less-mature stage of moral development.

His answer, by the way: Before creating anything, God loved.

That’s a darn good answer. Another notable answer is to a question on the salvation of non-Catholics (specifically, a girl’s grandfather). It reveals the remarkable changes in the way Catholics about salvation in the last few hundred years. Don’t read it without a tissue. Later, the Pope uses a soccer team as a metaphor for the Church, and twice states “The Devil is a loser!”

The book itself is beautiful, and has enough to it that you can come back to it again and again. This is a great book for kids to kick off conversation about topics that might not come up at the dinner table, and for adults to get back to basics, viewing the big picture through lens of the littlest.

The Devil is indeed a loser, but against such wisdom, eloquence, integrity and heart he doesn’t stand a chance.

Disclaimer: this post contains Amazon Affiliate links. Purchases made through these links send some change into my piggy bank at no additional cost to you. A copy of this was shared with me by the publisher, though I plan on buying plenty of copies to give as gifts! Visit Loyola Press’ Dear Pope Francis resource page for lots more.