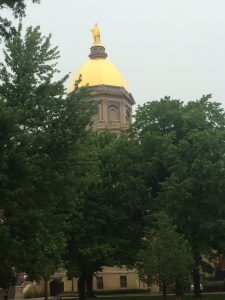 This week I am sharing some of my remarks from Notre Dame Vision’s inaugural Summer Conference for Liturgical Music Ministers. Today’s thoughts were part of a workshop on Accompanying Fellow Disciples.

Even by college student standards I was an emotional wreck during my undergraduate days. I was quite depressed and had a monstrously bad opinion of myself. No matter how much evidence I had to the contrary I never believed that people wanted to be around me. The only part of my life I felt worth of admiration was my singing. I knew that this was something I was objectively good at.

When I had solos at mass I always hoped that a big group would be there (and, of course, that whatever shaggy-haired boy I had a crush on at the time would be there, too). Though I cringe to think about it now, I had settled on my musical talent as the one thing that could possibly make anyone want to be around me.

Intellectually I knew not to be flashy or distracting in my pursuit of admiration. Though I wanted attention, I didn’t want anyone to know that I wanted it. So though on the surface my ministry didn’t look much different than it does now, I remember that feeling, that pathological need to be admired, so clearly because it was such a weigh. Investing my musicianship with such a fraught power was nerve-wracking and exhausting.

Obviously this was not simply a ministerial concern. This was part of my relationship with myself, and when I healed that relationship many other issues resolved. The recipe for me to become spiritually and emotionally healthy had three ingredients: time, therapy, and prayer.

Time: I was barely 20 and needed a few more years to grow up.
Therapy: Talking and taking apart my life so I could look at the parts and put them back together.
Prayer: I went to daily mass and prayed to be healed and with all of these three elements coming together, I was.

Now my attitude toward singing has done a 180. Rather than viewing it as the only admirable thing I do, I don’t view it as very admirable at all. It’s a gift: some folks can hit a baseball, some have lovely eyes, I can sing. I can be proud that I work so hard at and that I share it, but my self-worth doesn’t hang on it. I know my gifts and acknowledge them, and by doing so I put them in their proper place.

What works for me is to cultivate healthy humility, one that acknowledges strengths and weaknesses and doesn’t take any of them too seriously. From this place of realism I can allow my service to be a gift and not load it up with extra baggage.

In what ways have you grown in order to serve others?